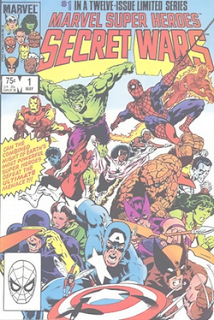 Over the past year or so I've been subscribed to Hachette's partwork series The Marvel Graphic Novel Collection. It's brilliant: every four weeks I receive a pair of hardcover Marvel Comics collections in the mail at AUD$19.95 each. I've always been more of a DC fan than a Marvel reader, so this collection has given me the opportunity to read a whole pile of quite famous storylines and runs that I hadn't previously read.

A case in point: the first six issues of Marvel Superheroes: Secret Wars, widely considered the first of the big summer crossover epics that now seem to hit the Marvel Universe twice a year or so. We just finished Age of Ultron and Infinity is already getting started. In previous years we've had Seige, Secret Invasion, Civil War, Spider-Island, X-Men Schism, Avengers vs. X-Men and many, many more - and Secret Wars is widely seen as the forerunner to all of them.

The series was originally developed to launch a line of Marvel superhero action figures, and as a result it features a huge cast of Avengers and X-Men as well as a similarly large cast of super-villains. They are all transported to a distant planet where a mysterious entity known as 'the Beyonder' orders them to fight each other to the death.

This book was hugely popular at the time, with each issue selling more than a million copies each. The toys they were designed to launch weren't nearly as successful, but their effect is all over the comic: heroes and villains each have their own base (conveniently designed to be adapted as a toy playset), as well as a variety of vehicles and accessories. The book's premise is wafer-thin: a bunch of heroes and villains fight each other over and over. It's written by Marvel's then-editor in chief Jim Shooter, who's never been a particularly decent writer. Certainly there's no evidence he can write on show here.

This is only the first half of the epic: at some point in the future Hachette will deliver my hardcover collection of Secret Wars Part 2. I don't mind waiting: even taking its age into consideration this is a distinctly dull and cliche-ridden series. It's the first Marvel mega-crossover, sure, but it's a crushing disappointment. Given the poor quality of most of Marvel's other crossovers, it certainly set a template.
Posted by Grant at 9:13 AM