Who50: "The Girl in the Fireplace" 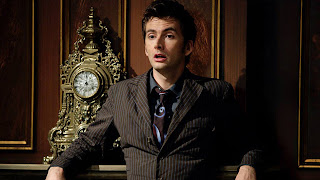 Who50 counts down to the 50th anniversary of Doctor Who by reviewing my favourite episodes and serials over the history of the programme, counting down from #50 to #1. Today, #17: "The Girl in the Fireplace", a 2006 episode written by Steven Moffat and directed by Euros Lyn.

The TARDIS arrives on a deserted spaceship somewhere in the 51st century - a spaceship inexplicably linked via a portal to the fireplace of an 18th century French palace, and the bedroom of famed mistress Madame de Pompadour.

"The Girl in the Fireplace" is an unexpected gem: it takes a premise that was previously unthinkable in Doctor Who (the Doctor has a romance) and not only pulls it off, but pulls it off in a way that feels natural, believable and as much a part of the fabric of Doctor Who as Daleks or Time Lords. Once again it's a Doctor Who pastiche - in this case cribbing liberally from Audrey Niffenegger's The Time Traveller's Wife. Moffat would return to this book later on when he crafted the Doctor's romance with River Song.

This episode would not succeed as brilliantly as it does without the central performance by Sophia Myles as Renette, aka Madame de Pompadour. She gives the story its heart, and she has outstanding chemistry with David Tennant. Tennant himself gives one of his best performances here, giving the Doctor a lot of sadness but without ever allowing it to overwhelm the humour of the piece - something he starts failing to do in his later years in the role.

The clockwork robots that menace Renette throughout her life are wonderfully designed and utterly creepy. Likewise the mystery surrounding why they're so intently focused on an 18th century mistress is rather sinister and ultimately quite clever.

This is, ultimately, one of the best Doctor Who episodes ever made. The sad bits are sad, the romantic bits romantic, the monsters scary and the Doctor fabulously heroic. It even has a horse named Arthur. What more could a discerning Doctor Who fan want?
Posted by Grant at 9:17 AM