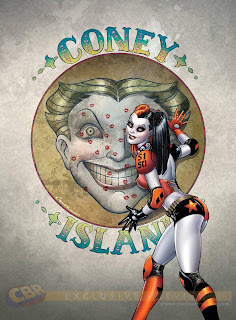 One big announcement that DC has made before the San Diego Comic Con is the upcoming release of Harley Quinn, a new ongoing monthly written by Jimmy Palmiotti and Amanda Conner. They're a great writing team and give me a lot of hope for the book, but then I remember how Harley has been treated by the New 52 and get fairly ambivalent about the prospect.

It's good that DC are attempting to add another female protagonist to their line-up. It's good that they've secured such a strong pair of creators to guide the book (an interior artist is yet to be announced). Now all they need to do is ensure the character is redeveloped a bit towards the old-school funny Harley Quinn that worked, and away from the bondage-outfit overtly sexualised version that's been headlining Suicide Squad for the past two years. Amanda Conner has cited roller derby girls as an influence on their take on Harley, which sounds like a great idea. I really hope it works out. I love the character, and would love to see DC treat her a bit better - and also maybe get her out of short-shorts and poor-fitting corsets.

Under the cut: reviews of All-New X-Men, Batman and Catwoman, Batwoman, He-Man and the Masters of the Universe, Justice League of America, Legion of Super-Heroes, Revival, Thor: God of Thunder, Ultimate Comics Spider-Man, The X Files and Wonder Woman.

I'm not going to lie: this book is really beginning to drag. I struggle to work out what has possibly happened so far that's taken Brian Michael Bendis 14 entire issues to tell. The dialogue still sparkles, the character interplay is strong, but the novelty of 1960s X-Men in the present day has almost entirely worn off. Now I want plot and pace, and I'm honestly not getting it. (2/5)

Batman's continuing process of grief continues in this excellently written and illustrated comic, in which Catwoman begs Batman's help to rescue a prisoner from a foreign embassy on behalf of the Justice League of America. It's wrapped in a beautiful cover by Gleason and Gray, and in addition to Bruce and Selina's adventure also continues to flesh out Carrie Kelly as the Bat-family's newest supporting character. The odds of her slipping on the Robin costume are getting higher every month. (5/5)

This is an issue all about preparations: Batwoman and the DEO's preparations to hunt down and capture the Batman, and Bette and her team's preparations to rescue Batwoman from the DEO. While this issue may be mostly set-up it still finds time for some action (with a nice cameo by Bane) and a lot of character development. This continues to be such a strong comic, with rich characterisation and beautiful artwork. If this issue is any indication, the next few are going to be a real treat: Batwoman vs. Batman. (4/5)

He-Man and the Masters of the Universe #4

Teela is a prisoner of Adora, King Randor's forces hold the walls of Greyskull, and He-Man travels to the bowels of the castle to reforce his magical sword. I'm intrigued by this series but not overwhelmingly entertained by it; I don't think it's quite good enough to justify the purchase, yet I want to see where it goes. I think it's core problem is that it's fallen between two different takes on the material. It could have been a nostalgia-fest for 1980s kids, with all of the toy characters reproduced on mass for colourful, freezy adventures. On the other hand it could be a completely fresh take on the material, taking the base concepts and characters but giving them all an entirely grounded and more realistic style. Instead Giffen and Mhan are trapped in a half-and-half world where some bits feel grounded, but then Mekanek walks around the corner, or some characters are the same as the toy and cartoon and others (like Adora) are radically different. I think they need to pick one take or another, because the middle ground is just messy. (2/5)

"Trinity War" continues in this second part, which is a lot more satisfying than the fairly clunky opening. I'm still not entirely sure it's working, and I'm also aware that after Age of Ultron I had promised myself not to buy into any more of these multi-title crossover epics. While the problem that plagued the first part - heroes being forced to act in ways that service the plot but not accurately fit their character - is lessened here, it's still a big concern. This issue also marks the proper debut of the New 52 Question, who's intriguing enough to make me suspend judgement on their removing Renee Montaya from the role. (3/5)

The big battle that's been going on for the past few issues keeps battling on. Jeff Johnson has a thickly inked, vaguely amateurish style: his work looks undercooked and underdetailed, yet aren't stylised enough to compensate for the lack of complex line work. As writer Levitz feels like he's going through the motions, taking the pay cheque each month in return for another 20 pages of script. This volume of the Legion concludes next month: at this stage it's pretty much a mercy killing. (1/5)

The second trade paperback of Revival came out this week, cleverly timed so that readers picking up the first two volumes can walk straight back into the store and buy this issue. It's a strong jumping-on point too, re-asserting the comic's premise and cast neatly and without feeling redundant. This isn't an issue for shocks and scares - it's one for firming up character and getting things in place for the third story arc. I continue to love this comic. Hilarious and gorgeous Skottie Young cover too. (4/5)

The battle to stop Gorr from activating his universe-changing godbomb hits a thrilling climax in this issue, which boasts great dialogue, moments of lightness and tragedy, and some of the best epic action scenes you're going to find in a comic book this year. I'm particularly entertained by future Thor's daughters, and kind of hope they get their own one-shot or miniseries soon. It looks like this storyline, which has been running for the past 10 issues, will wrap up next month: it's been a brilliant adventure that will hopefully stand up as one of Thor's all-time best. (5/5)

There's particularly beautiful character work in this issue, as Miles struggles against becoming Spider-Man again, with the help (or hindrance) of Ganke, Kate, Jessica and Gwen. Did you see that? Three female character names in a row, and all three have agency, intelligence and guts, and I didn't even mention Dagger and Aunt May. David Marquez illustrates them beautifully as well - no character looks like any other character, and their faces are consistent and deeply expressive. We all tend to praise Bendis' beautiful character work on this comic, but a lot of the heavy lifting is in Marquez' able hands. (5/5)

There are some revelations in this issue: okay, basically there are two. Both change key plot points from the original television series. The first made me raise an eyebrow but I rolled with it - clearly Chris Carter was feeling a bit sentimental. The second made me shout 'oh come on' at the page, which probably wasn't the reaction the production team were looking for. This remains an entertaining book for fans of the show, but in one issue it's gone from 'incredibly promising continuation' to 'continuity-porn spin-off book' - and that's disappointing. (3/5)

Azzarello and Chiang make good on last issue's cliffhanger, providing the New 52's first proper glimpse of New Genesis. It's been re-envisaged wonderfully, and I really hope that DC makes good use of it soon - perhaps in a relaunched New Gods comic? It really looks as if the all-out battle against the First Born will be kicking off next month. This issue is pretty much all set-up, but it's very entertaining set-up. (4/5)