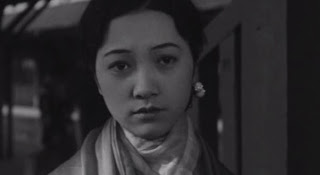 For my second Japanese silent film, I figured I would stick with Mikio Naruse and watch one of his more dramatic works. Apart from You was released by Shokiku Films in 1933, and is a full-length feature with a much more serious tone than the light playfulness of Flunky, Work Hard.

Kikue is a middle-aged woman who works as a geisha to support her teenage son Yoshio. Yoshio in turn resents his mother for what he sees as a disgraceful profession, and he rebels by getting drunk, dismissing her affection and joining a local street gang. Terugiko is a young geisha who works with Kikue, and forms a tentative friendship with Yoshio while harbouring a deep resentment against her parents for forcing her into her profession. Apart from You follows these three character relationships in a solid and mature melodrama. It's not perfect, but it's outstanding how watchable it is after 80 years.


As with Flunky, Work Hard, much of the film's appeal comes from watching the backgrounds whenever the characters walk around in public. There's an early scene where Kikue and Terugiko share a conversation on a footbridge. The wooden bridge looks remarkably old-fashioned, and both women are dressed in their geisha outfits, yet along the horizon there's a row of smokestacks: a sign that Japanese industry is rolling on regardless. I have no idea if the scene is intentionally framed that way or if its simple serendipity, but either way it works.

There is another stunning sequence towards the film's end where Naruse cuts from a raucous party of geisha and businessmen laughing and dancing in one room to Kikue struggling with a client and a knife in the other. The actions mimic each other: the circular motion of the gramophone, the laughing woman dancing in a circle, and Kikue and the client spinning around struggling with the knife. This blend of dance and violence was famously used in Bob Fosse's 1972 film Cabaret, but of course that was four decades later that this.

Naruse uses a strange technique here: whenever there's a key emotional beat in the story, he stops to track the camera in on the faces of his cast. He does it to each character in turn, which initially comes across as slightly farcical - until you get used to the technique and then it simply feels like part of the film.

This isn't a faultless film - for one thing Akio Isono is way too old to be playing the dour teenager Yoshio - but it's a fantastic one nonetheless. It's fascinating how, while the Japanese military was expanding into China through a series of increasingly brutal invasions, Japanese filmmakers back home were presenting films with such delicate, considered humanity. It's a strange contrast.
Posted by Grant at 9:12 AM