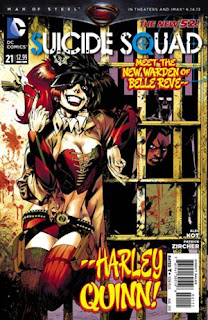 Like Young Justice, The Edge is a line with a lot of cancellations. This is where most of the old Wildstorm characters ended up, and almost without exception they failed to find an audience. Books that haven't survived the first two years include Deathstroke, Voodoo, Grifter, Blackhawks, OMAC, Men of War and Team 7.

Deathstroke was one of the books I rather liked, until it was taken over by Rob Liefeld - whose art and writing I don't particularly enjoy. Also good was OMAC, which only lasted eight issues but which is well worth picking up in trade paperback.

One book in this range is still selling more than 20,000 copies. That's Suicide Squad, which started off incredibly awful and vaguely offensive before slowly getting better (or so I've been told, it's not a book I follow). Improvements in quality don't look like they'll save the book: sales are down 3% compared to May and down more than a quarter in the past year. At this rate the book's likely to be cancelled in the next 6-9 months.

Critical darling All-Star Western continues to shed readers, particularly in the last year or so. Sales are down 38% compared to June 2012, with the book now hovering in that dangerous 15,000 copy territory. This is a book DC seems likely to keep around, however; it's predecessor Jonah Hex never got cancelled despite monthly sales of as low as 10,288 copies.

Stormwatch is a book that absolutely deserves to be cancelled. A messy introduction by Paul Cornell was followed by a bizarre run by Peter Milligan in which the team seemed more interested in fighting itself that its enemies. In recent months a soft reboot of the title has seen Jim Shooter take over as writer. It's not very good. Sales have dropped a whopping 40% in the past year to only 12,277 copies - down 6% since May 2013 alone. Now it's just a matter of time.

Already cancelled is the science fiction book Threshold. This was pretty much hobbled straight out of the gate with a $3.99 price tag and too few branded characters. Sales in June 2013 were down to 10,184, making it one of the lowest-selling New 52 books of the past two years.