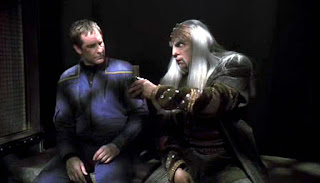 After defending a group of refugees from a Klingon warship, Captain Archer finds himself on trial by the Klingon Empire. If he can not convince his advocate to make a better defence, he'll be spending the rest of his life on the penal colony of Rura Penthe.

"Judgment" is a two-pronged exercise. On the one hand it's a by-the-numbers courtroom drama with limited sets and cast and no real surprises. On the other it's a dive into Star Trek continuity, with J.G. Hertzler (Deep Space Nine) returning to play a Klingon, and name-checks and cameos for a whole raft of Klingon backstory and paraphernalia. We see Rura Penthe (Star Trek VI: The Undiscovered Country) and Narendra III (The Next Generation), we meet an ancestor of the Duras family (also The Next Generation) and hear mentions of targs, bloodwine and other stuff.

All in all it's pretty hollow stuff. There's some fantastic material for Hertzler, as he plays a Klingon lawyer who longs for the more honourable 'old days' and bemoans the rush of every young Klingon to become a bloodthirsty warrior. That actually works into Star Trek history incredibly well, since by The Undiscovered Country the Empire's runaway military expansions have crippled its economy and devastated its environment. It's just a shame it all looks so damn cheap. This is BBC-style small room conversation in a series that generally thrives on visual thrills and action.

The regular cast barely get a look-in this week, and all up it's a fairly missable episode. If you're a hardcore fan of the Klingons as they developed through Deep Space Nine and The Next Generation, it's possibly worth a look. If not, you can actually skip it. I certainly will the next time.