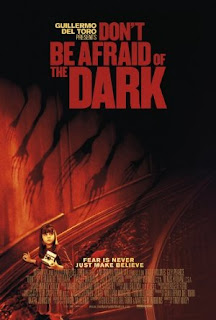 Eight year-old Sally Hurst is sent by her mother to live with her father Alex (Guy Pearce) and his girlfriend Kim (Katie Holmes). Alex is restoring the historical Blackwood Manor, an abandoned mansion with a dark past. Sally begins to hear voices coming from a secret basement, and before long she is targeted by a strange army of fairy-like creatures intent on dragging her down to their lair.

Guillermo Del Toro produces but does not direct this passion project; an adaptation of a 1973 TV movie he saw as a child and had always wanted to remake. It's odd in many respects, that he cared enough to see the story remade but not enough to actually oversee the remake himself. Instead the directorial reins were handed to newcomer Troy Nixey, a comic book artist making his directorial debut. It's an entertaining popcorn flick, albeit one that never quite fulfils its potential.

I think one major problem is that the little creatures - basically demonic tooth fairies - were already co-opted by Del Toro into his own film Hellboy II: The Golden Army. As a result they lack the impact they might otherwise have had. They're certainly well designed and presented, but what could have been a jaw-dropping revelation instead inspires a sort of wry 'oh those guys' response.

The cast are generally strong: Guy Pearce is always good, he's one of Australia's best actors and often one of its most unfairly overlooked. Katie Holmes is solid in a relatively undemanding role, while Bailee Madison knocks it out of the park with her haunted, terrified performance as Sally. Australian viewers will also get a kick out of an early cameo by local acting legend Garry McDonald, not to mention a scene inside Melbourne's State Library (the entire production, while set in the USA, was shot in Victoria).

Given its roots as a TV movie, it's perhaps unsurprising that Don't Be Afraid of the Dark is a fairly old-fashioned movie. It's undemanding and very conventional, without any elements or sparks of originality to lift it up and make it something unique. It was certainly enjoyable, but it was also unexceptional.
Posted by Grant at 9:17 AM