Bodacious Space Pirates: "The Final Battle is at Midnight" 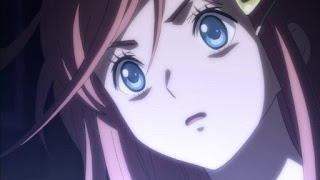 The Odette II continues on its voyage, although it becomes clear that the ship is being tailed by another vessel. Marika discovers that the entire class knows she's under consideration to become a pirate captain, and together they agree to fight the enemy vessel once their teachers are asleep.

The battle might be at midnight, but it sadly doesn't begin in this episode. It's actually a little crazy once you think about it. An anime like Blue Submarine No 6 was done and dusted after four episodes. This anime has barely started in the same time. We've now spent three episodes on a school space yacht cruise, and we're clearly going to be spending a fourth one there as well. It's kind of frustrating.
The series continues to be strong in all the ways that it already is: nice visual design, appealing characters, beautiful music, and so on. It's just taking its sweet time actually doing anything with those assets. A title like Bodacious Space Pirates suggests something a lot faster-paced and comedic; while there's the odd bit of humour scattered through the series so far, it does take itself surprisingly seriously. It's also dragging like nothing on Earth.

I do adore the design of the Odette II. It's distinctive, and more importantly it appears to work like an actual spaceship would. If you're not looking outside of a windscreen, why have all the seats facing the front? Instead this ship arranges the various technical consoles around a central holographic display, which not only makes a lot of sense but also allows the massive teenage cast to talk with one another more easily. It's also in zero gravity, and this episode makes good use of that feature in how it shows the cast moving around.

There's still quite a lot of shots that almost point up schoolgirls' ridiculously short skirts, but that's more often than not the price we have to pay to watch this shows: creepy 'fan service' for the domestic okatu crowd.

I'm liking the series. I'm enjoying the characters and the overall vibe. With pacing this draggy however, I can't in all good conscience give this episode my approval. It's unnecessary padding. Quite frankly, if you were told that 'the girls find their being tailed and decide to take the pursuing starship on' you'd be able to skip this installment entirely. Four episodes in, and Bodacious Space Pirates is running at 50%.
Posted by Grant at 11:15 PM