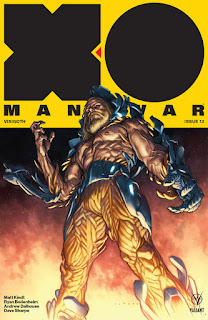 Aric attempted to unite a warring planet, but then failed to lead it. Now he is fighting for his survival against a team of bounty hunters that have been paid to kill him on the same planet's behalf. In order to survive, Aric has finally re-united with his armour. Now all that is left is to see if he does survive.

Matt Kindt's epic 13-issue story arc comes to an explosive conclusion as Aric fights for his life, while flashbacks finally reveal the heartbreaking season for his arrival on Gorin in the first place. It's a well-rounded and emotionally satisfying conclusion; one that ties up loose ends, sets the book into a fresh direction, and still finds space for action.

X-O Manowar has been Valiant's best book this past year, and I'd urge anybody with a desire for a well-illustrated and epic-scale space fantasy to track down the trade paperbacks and give it all a read. This should be an ongoing example to future comic book writers on how to shake up an existing superhero book and give it a fresh style and angle. (4/5)

Under the cut: reviews of Batman, Descender, Star Wars: Poe Dameron, Shadowman, and The Spider King.

If Poison Ivy controls the mind of everybody in the entire world except for Batman and Catwoman, including all of the other superheroes, how on Earth can she be defeated? The answer, of course, is 'inventively'. "Everyone Loves Ivy" reaches an unexpectedly sudden conclusion in a manner that is smart and satisfying, yet still doesn't quite make this three-part arc completely work. The concept has felt too large for the length of the story. Of course Mikel Janin's art cannot be faulted, and additional artist Hugo Petrus fills in for a few pages in a very unobtrusive fashion. To be honest the issue's best aspects are its neat redefinition of Poison Ivy, and wonderful use of Harley Quinn. They're worth the issue price alone. (4/5)

This is the one. For anyone that has been reading Descender, month in and month out, for more than two years. This is the issue you want. The flashback to 4,000 years ago concludes, along with the story of the scientist Osris and his extraordinary discovery in space. Now the book is free to return to its present day with a full understanding of what has been going on, what the states are, and what it has all meant. Issues like this are usually a slam dunk, because they are simply so satisfying to read, but it's worth highlighting just what a tremendous pay-off this issue has been - in terms of both writing and artwork. (5/5)

The chase to secure Lor San Tekka reaches its climax this issue, and while the fate of this elusive historian and treasure seeker has always been something of a foregone conclusion Charles Soule still manages to build up plenty of suspense and throw in a few surprises during the final battle. In all honesty it is a bit of surprise that Poe Dameron is not wrapping up here: it has pretty much taken us to the eve of The Force Awakens, and which such a narrow narrative gap between that film and The Last Jedi, I'm not sure where else the book has to go. Nonetheless this is a solid issue. (3/5)

Alyssa Miles heads out into the waters surrounding New Orleans on a hunt for dangerous magic. She finds a trap lying it wait, but thankfully she also finds Jack Boniface: the Shadowman. Valiant remounts another of their legacy characters for a fresh run, this time courtesy of Andy Diggle and Stephen Segovia. This is a fairly straight-forward story, based in voodoo and the like, but somehow it never really excels itself. It never finds that extra edge of angle to make it a must-read. If you're an existing Shadowman fan, you've probably picked this up already. Otherwise, it's simply nothing more than enjoyable. (3/5)

Aliens arrive in early medieval Europe, only to find themselves facing up against a band of vikings. This issue feels much stronger than the last, with a nice line in humour as the humans begin raiding the wreckage of the crashed spaceships. The issue is also an excuse for Simone D'Armini to do some excellent art, varying the style at one point in striking and effective fashion. Adrian Bloch's colours make good use of the heavy inking to really pop off the page. I was passively intrigued before; now I'm hooked. (4/5)
Posted by Grant at 11:01 PM