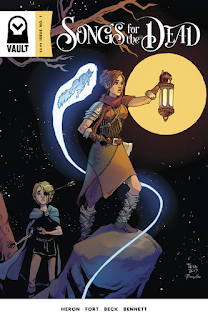 Bethany is a young woman travelling a medieval European-style world looking for adventure. She claims to be a minstrel, but that is simply a cover to hide her true identity: Bethany is a necromancer.

The good kind of necromancer, that is, and her first quest - to find a missing boy in the forest - gives her ample opportunity to show how one can raise the dead and still be a good person. This new comic series Songs for the Dead has a warm tone and a rich heart, even though both story and art feel a little limited. Coming via independent publisher Vault Comics, it feels very much like early career work.

That is not intended as a criticism by the way, it simply means that it is worth measuring your expectations before diving in. There is potential in the story, and a likeable protagonist, and while Sam Beck's artwork is perhaps not quite at a professional standard his colours lift it up considerably. I found myself rather taken with this book; with luck it will continue. (3/5)

Songs for the Dead #1. Vault Comics. Written by Andrea Fort and Michael Christopher Heron. Art and colours by Sam Beck.

Under the cut: reviews of Aquaman, Batman, Batman and the Signal, Star Wars: Doctor Aphra, and Superman.

Aquaman leads the charge against the magical 'crown of thorns' that has enveloped Atlantis. Meanwhile Mera is going to die if she cannot be taken to the surface in time. It's a mid-point climax to the Atlantean revolution against its diabolical new king, and a parting of the ways - temporarily at least - for Aquaman and Mera. He's back here in a month attempting regicide; she starts off next week in her own six-issue miniseries. The pace here is great, as it has been for a year now, and Riccardo Federici's painted artwork is just sensational. (4/5)

This is an intriguing, beautifully illustrated, but very short opener to an all-new Poison Ivy-centric storyline. I really cannot praise Mikel Janin and June Chung enough for this issue's gorgeous artwork and colours. It is genuinely tremendous. Sadly, while writer Tom King nails its ominous tone, its reliance of big panels leaves it very short in the story department. Simply not enough happens to make it feel like I got my money. It will likely work better in the trade paperback, but for individual issue buyers it feels like a little bit of a rip-off. (3/5)

Batman and the Signal #2

Duke Thomas' first solo adventure as the Signal leads him back to the last person he expected. This feels like a really traditional sort of DC superhero miniseries, of a kind you saw a lot in the late 1990s. It's rich in continuity, but not in a way that makes the story difficult or confusing, and Cully Hamner's artwork is superb and well suited to the material. It is great to see Izzy and Riko supporting Duke: all three were self-styled vigilantes back in the New 52 series We Are Robin, and it's a gift to the readers that DC has not forgotten that series. (4/5)

Dr Aphra is off on a new mission to retrieve her robot master's memories from a top secret Imperial facility. Getting in there will take all of the guile she has - so why start at a Rebel Alliance training camp? Funny, fast-paced writing, strong and engaging artwork, and a guest appearance I never saw coming: this comic is just consistently brilliant. It's the best Star Wars that Marvel is producing right now, and doesn't seem to be letting up any time soon. (4/5)

Superman and Superboy remain trapped on a planet facing immediate destruction, and hunted down by the very civilization they came to save. This is a great end to a neatly composed two-parter, one that has the excitement of Superman on an interplanetary adventure as well as an understandably simple but still effective look at issues of religion, choice and differing cultures. James Robinson establishes a beautifully bittersweet tone to the issue, while Ed Benes' artwork is stunning as always. This is the sort of issue Superman exists for. (4/5)
Posted by Grant at 9:38 PM