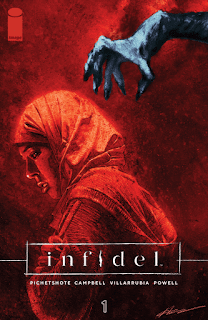 Aisha is an American Muslim, recently moved into a new apartment building with her non-Muslim partner and his subtly racist mother. When she begins to suffer growing and increasingly realistic nightmares, Aisha comes to believe that something inhuman is living in the building with them.

Infidel is a fantastic new horror comic. It's fantastic for a number of reasons. For one thing, the art is sensational. It uses a realistic style, and that makes the supernatural occurrences really stand out and feel atmospheric and frightening. Aaron Campbell's artwork makes the characters feel real, and that makes the horror elements feel disturbingly real too.

Then there is Pornsak Pichetshote's script, which cleverly ties in the horror material to real-world social and political issues. It's smart and effective, and it's not hard to see this being optioned as a feature film any day now.

This is, all up, a great first issue - the rest of the miniseries looks set to follow in much the same quality and style. (5/5)

Under the cut: reviews of Detective Comics, Doctor Strange, and Giants.

With Clayface dead and Batwoman setting up her own rival team, the final act of James Tynion IV's run on Detective Comics comes into shape. Tim wants to rebuild the team that has collapsed. Leslie wants Bruce to get Cass out of the vigilante life before she's permanently psychologically scarred. Bruce simply wants it all to stop. This issue works outstandingly well because so much character work under-pins it. From a great flashback prologue to a left-of-field cliffhanger, this is the start of what's hopefully going to be a great finale. (4/5)

While the rescue mission seen in Damnation #2 is put in motion, Stephen Strange remains trapped in Mephisto's Las Vegas tower, his legs shattered by Thor's hammer and with no hope of escape. A hugely unexpected guest appearance will likely thrill long-term Strange fans, and Henrichon's artwork feels a bit more fluid in this issue than it did in his last, but the big problem with this issue is that it doesn't really push forward the plot. Anyone that read Damnation #2 knows where it is headed, and that makes this an attractive, well written, but almost entirely redundant read. (3/5)


Dark Horse. Story and art by Carlos and Miguel Valderrama.

The last issue of Giants ended rather abruptly. Turns out it was because Dark Horse accidentally left the final page out when it went to print. Accidents happen, and kudos to editor Randy Stradley for explaining the mistake straight-up and providing it at the beginning here. Gogi and Zedo's now separate lives push them far apart - far enough that when they finally encounter one another again, there may not be a friendship left to save. With their broken relationship feeling as Akira-esque as much of the artwork, Giants is really bringing across a Katsuhiro Otomo vibe that I am really enjoying. This is big screen, cinematic comic book drama, and has consistently been a fantastic read. Monstrous bugs, underground gangs, giant monsters and personal betrayal all add up to something special. (5/5)
Posted by Grant at 12:31 PM