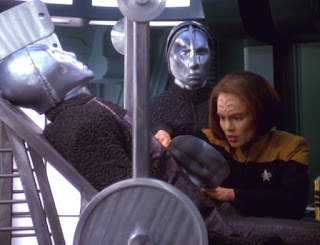 It is 15 January 1996, and time for another episode of Star Trek: Voyager.

When Voyager recovers an inactive robot from deep space, Torres (Roxann Dawson) successfully repairs and revives it. Believing her to be one of the god-like aliens that created it, the robot kidnaps Torres and forces her to build a prototype for more of its kind to win a robot-vs-robot civil war.

"Prototype" is just a straight-up bad piece of television. Weak in concept, poorly brought to the screen, and crippled by one of the worst pieces of costuming undertaken in Star Trek history. Regardless of any other faults, if a single element of "Prototype" scuttles the whole enterprise it is those ridiculous robot costumes. Without exaggeration, Doctor Who was presenting more convincing robots more than 30 years before this episode hit the screen.

Jumping back a little, however, and the basic premise is already a fairly shaky proposition. Finding a robot, bringing it to life, getting kidnapped and forced to take sides in a war - it all feels very stereotypical, as if one has seen this exact episode play out before without ever really being able to pinpoint when it was. Characters say the sorts of lines they always say. The plot develops the way it always does. It simply feels generic and more critically it simply feels bored. I cannot imagine anybody had much enthusiasm for making this episode. Certainly I felt no enthusiasm watching it.

Dull is one thing, but the robot costumes. On the one hand it feels critically weak to put so much weight on the production design, but the ordinary script does not leave much else to care about. On top of that, the design is genuinely awful on a staggering level. It looks like what it is: actors in suits. They don't look convincing, and they don't sound or move convincingly. Given they are the focus of the episode we have to look at them a lot. That isn't fun.

It's a surprise to see the episode is directed by Jonathan Frakes, who usually does a much better job than this. I assume he just ran out of luck when they were assigning scripts, because despite some solid camera work and a decent performance by Roxann Dawson, this simply doesn't come together. 13 episodes into Season 2, and seven of them have been good. The quality ratio slips to 54 per cent.
Posted by Grant at 12:02 PM