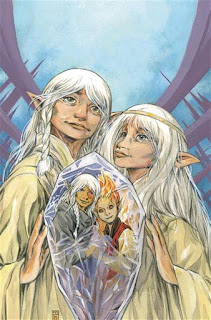 The world above is ending. The world below has one last chance, and even that now appears to be lost. It's the obvious place to begin this final issue of Boom Studios and Archaia's 12-part sequel to The Dark Crystal, one based on the never-filmed screenplays by Craig Pearce, Annette Duffy and David Odell. It has been marvellous stuff, and it ends on a beautiful note.

The greatest achievement of Simon Spurrier and Phillip Kennedy Johnson's comic script is that it has really felt appropriate to the world of The Dark Crystal. The emotional tone, the settings, and the dialogue all feel authentic and well-matched, while expanding the story into new environments and situations. Had this ever been produced on-screen, it would have likely been a satisfying follow-up to the beloved original.

Kelly and Nichole Matthews' artwork is particularly strong for this final issue, with some bold panel layouts and brightly vivid colouring. It has helped make it a wonderful reunion for this reader with a childhood favourite. (5/5)

The Power of the Dark Crystal #12. Archaia/Boom Studios. Written by Simon Spurrier and Phillip Kennedy Johnson. Art and colours by Kelly and Nichole Matthews.

Under the cut: reviews of Action Comics, Darth Vader, and Judas.

The cover to this issue promises Superman under a hail of US military bullets as a bold headline announces "the fury of General Lane". In truth, General Lane goes to his daughter Lois' house for an awkward dinner. I get that comic books need to sell, but this is one of the most misleading covers I've seen. As for the issue itself, it's good without being great. It's a nice bit of character work, and acts as a bit of an epilogue for the last year or so of storylines. A side plot sees Superman free Hank Henshaw from the Phantom Zone, which feels like a nice bit of housekeeping and a potential set-up for the future. Will Conrad's artwork is solid without feeling great. (3/5)

An unexpected three years of story have passed since the last issue, throwing into question what on Earth the last two issues were about. On the Emperor's behalf, Vader travels to the planet Mon Cal to show the Empire's military might to the restive population there. It's an excuse for fun guest appearances by much-liked film characters, as well as a chance to assert a much more confident and formidable Vader going forwards. Both seem like smart moves. This issue is a hell of a lot of fun for Star Wars fans. It's indulgent, but enjoyably so. (4/5)

The first issue of this four-part Biblical story felt like something quite provocative and interesting, but the following two issues seemed a little conservative - despite maintaining a high quality of art and writing. This fourth and final issue is superb: it takes a little corner of Christian mythology and aggressively reworks it. It provides tremendous insight into character. It makes a redemption story that feels appropriate and natural. Jakob Rebelka's moody visuals express the tone and emotion wonderfully. This has been a tremendous series. (5/5)
Posted by Grant at 9:01 AM