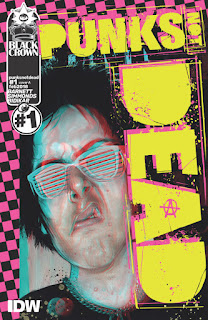 Back in 2016 comic book editor Shelly Bond was crudely dropped from DC's Vertigo imprint as part of a broader publisher shake-up. Landing on her feet at IDW, she went about setting up her own imprint of original comic book titles. Black Crown has published a couple of books so far, some promising (Assassinistas) and some less so (Kid Lobotomy). With Punk's Not Dead, a new ongoing monthly, I think she has hit the jackpot. If you want a good mature age comic book, this very well may be it. If you want a book to remind you of DC Vertigo at its height, this is even more likely to be your book. Punk's Not Dead has Shelly Bond's editorial insight all over it.

Fergie is a rebellious teenager from a town near Manchester, who - after an unexpected encounter at Heathrow Airport - finds himself visited by what appears to be the spirit of punk singer Sid Vicious. At the same time MI5's top-secret Department for Extra-Usual Affairs is tracking down an imp from hell inside 10 Downing Street.

If you were a fan of Vertigo back in the mid-to-late 1990s, Punk's Not Dead is like putting on a warm, comfortable sweater. It feels immediately familiar, infused with a sense of British pop culture and brilliantly and effectively illustrated. It's funny where it needs to be, and points to a broader supernatural storyline as it goes on. Previous Black Crown books have left me intrigued. This one has me actively excited. (5/5)

Since it relaunched, Batwoman has been going through a somewhat interminable flashback-dominated storyline about Kate Kane's "lost year" when she fell in love with the criminal ruler of a lawless island. This issue provides some answers and context at last, but in all honesty it's been so drawn out and flaccid over the past year that it's becoming a chore to read it. Scott Godlewski is a good artist, so at least the flashback looks decent, but in all honesty that is one of the least interesting books that DC publishes. I think I'm bailing on it here. (2/5)

"Mayor Fisk" approaches its climax as Matt Murdock struggles to investigate Wilson Fisk's master plan for New York, while attempting to track down and stop the super-powered serial killer Muse. This feels like all of Charles Soule's story arc wrapping up together at once, and with next month bringing about the momentous issue #600, everything is set up here for one hell of a climax. It's really worth appreciating the stark, noir-esque look created by Garney's artwork and Milla's strong, dark colours. (4/5)

There's nothing so simultaneously thrilling and frustrating as following up on a monster cliffhanger with the words "Four thousand years ago". It's back story time for Descender, coming at a point where such back story is clearly necessary for the main storyline to continue forwards. It's a fairly simple new story - it kind of needs to be to jump in this fast - but Lemire's script and Nguyen's art give it all a suitable sense of scale and awe. This is the beginning of a three-issue arc, so hopefully they will build on this solid foundation and provide a worthwhile background before returning to the main narrative. (4/5)

There has been an attempted alien invasion, and Las Vegas has been levelled. Using his newly enhanced magical powers, Dr Strange brings the entire city back to life - but he brings with it an entire casino from hell, with Mephisto rapidly pulling in all of the cursed souls of the city. Strange heads in, and makes a wager - a game with the souls of all the victims at stake on one side, and Strange's own soul on the other. After a slightly shaky beginning (what invasion? Las Vegas was destroyed?) this forms into a relatively solid new miniseries. While the set-up still feels a little all over the place, Rod Reis' artwork is tremendous. A last-minute new team set-up also adds a lot of appeal. It will be interesting to see where this goes. In the end, Damnation is imperfect but promising. (3/5)

It has been a while since the last issue of Heathen, but this latest instalment is well worth the wait. The viking maiden Aydis continues her voyage with a ship of female pirates. Brynhild continues on her way, despite Aydis' absence having a growing effect. Freyja sees trouble in sight for both women, and takes matters into her own hands. Strong female characters, a positive sense of sexuality, and just wonderful artwork continue to make this one of my favourite current comic series. It's the art that does it the most: simple, delicate and hugely effective. (4/5)

Invader Zim is hot on the trail of a lost Irken artefact that can speed up and slow down time, but getting it will require a typically Zim-esque approach. This is a nicely satisfying issue, with a good comedic sense of what makes Invader Zim work, and some interesting artwork from Mady G that both respects the traditional designs and finds room for a distinctive look as well. One sequence in particular, involving differing time speeds, slave labour and Zim's vanity, really stands out. (3/5)

This issue marks an unexpected segue to the time when Quantum and Woody's goat gave birth to an energy-based reincarnation of their father, and what they did to spend time with him and try to save his life. It also provides a lot of background material regarding the childhood and adolescence of Eric, aka Quantum. It's funny, emotionally effective, and very, very weird - like Quantum & Woody often is. (4/5)
Posted by Grant at 9:15 AM