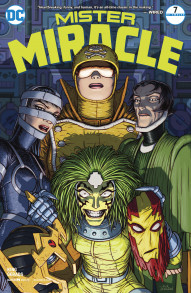 Tom King and Mitch Gerads arthouse superhero hit continues apace, with an issue rich in humour and packed with strong dialogue. There's a wonderful absurdity about the war between Apokolips and New Genesis being put on hold so that the Female Furies can wait in a hospital hallway for Barda to have a baby. King keeps the dialogue dynamic and sharp, and this allows the characters to feel less like superheroes and more like honest-to-god people that simply happen to have powers. Gerads continues to exploit the nine-panel grid format better than anybody since Dave Gibbons. The sense of timing - both comedic and dramatic - created by the format is a masterclass for aspiring comics professionals.

This is one of the comic series that absolutely deserves to be read in an episodic fashion, with each issue pushing forward a broader story while working as a self-contained 20-page work. It is hands-down one of the best books coming out of "the big two" this year. (5/5)

Under the cut: reviews of Invader Zim, Sleepless, and Vs.

A welcome issue that partially sidelines Zim to focus on his arch-nemesis - and conspiracy theorist schoolboy - Dib. A mission to replace a limited-edition bottle of Poop (it's a soft drink) leads Dib to an underground war of rival soda-powered wizards. Eric Trueheart's script is a good reflection of the series, and Maddie C's artwork manages to replicate the TV series with just a slight personal style impressed upon it. It's great to see a focus on Dib for the next two issues; he's a great character and it gives the book a sense of variety when it might otherwise become a little jaded. (3/5)

After a knightly tournament, Lady Poppy and her bodyguard Cyrenic find themselves separated at the feast - with unknown assailants still plotting to assassinate her. This book is building in a nicely subtle and measured fashion, with the exact details of this fictional kingdom and court, its people and the mysterious 'sleepless' bodyguards getting placed down piece by piece as required by the narrative. With beautiful artwork and a stunning sense of tone and character, this book should be on a lot more people's pull lists. (4/5)

In a far distant future, wars are settled by rival teams of armoured fighters on mainstream television. For the veteran soldier Satta, that means fighting two battles - winning the war, and maintaining his popularity with viewers. It's a great piece of satirical science fiction, one that's coupled with Esad Ribic's absolutely gorgeous painterly artwork. The design work reflect a Metal Hurlant sort of identity, and the rich colours make everything pop off the page. (4/5)
Posted by Grant at 12:33 PM