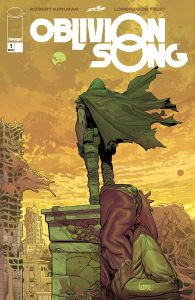 Robert Kirkman is pretty much the most successful independent comic book writer at the moment, thanks to the runaway success of his ongoing zombie series The Walking Dead. He's branching out to a fresh title this month, with Oblivion Song #1.

Something happened to Philadelphia. The city was sealed off and transformed. 300,000 people went missing, and what remains is a no-go zone filled with monsters. Nathan Cole uses advanced technology to teleport himself inside and rescue civilians still trapped there after a number of years. The US government won't help, and Nathan won't stop until he finds the brother who went missing during the event.

Oblivion Song boasts a neat premise, and a lot of potential for a developing story. The artwork by De Felici is well composed and appealing. The characters, to be honest, feel a little thin in this first issue, but they work well enough to hook the reader in to see what happens next. That is largely due to the last page cliffhanger, which is the cleverest element in the entire series premise. With an entire year's worth of issues already waiting to go to print, it's a guaranteed 12 issue run at least - and in a time when indie books get regularly delayed, that's actually a pretty enticing promise. While it's doubtful Oblivion Song is going to reach the prestige and success of The Walking Dead, it has potential to be something pretty outstanding all the same. (4/5)

Quick update: Las Vegas was destroyed and everybody killed during a big Marvel crossover. Dr Strange thought he'd resurrect everyone, but it turns out the destroyed Vegas was in hell and bringing back the city also brought hell to the Earth. Strange tried to gamble his way out of it but got caught cheating. Desperate to rescue his friend, Wong assembled an emergency super-team including Iron Fist, Blade, Man-Thing, Ghost Rider and a few others. They are basically a new Midnight Sons. I have to admit, that's all fairly awesome. Szymon Kudranski's artwork is great, and suits the tone of the book perfectly. (4/5)

Every issue of this odd Hanna Barbera adaptation makes me like it a little more. Want Snagglepuss covering for Marilyn Monroe while she's cheating on Joe Dimaggio with Arthur Miller? How about Huckleberry Hound sitting in the Stonewall Hotel with his boyfriend Quickdraw McGraw? The story being told is admittedly a little simple, but as an act of cultural collage it's wonderful. Mike Feehan and Mark Morales' artwork is imperfect but effective, plus there's a "Sasquatch Detective" back-up thrown in for free. (4/5)

For 38 issues now we've seen Oliver Queen run up against the Ninth Circle, almost get killed, be left for dead, get framed for murder, have his home city taken over and bought out by super-villains, discovered his mother was alive and a super-villain, and it all boils down to this climactic final issue. This has been a tremendous run for Green Arrow: an involving long-haul storyline, stunning and colourful artwork, and a great extended cast of characters. Who knows there the story goes from here, but for now Percy and Ferreyra deserve to take a bow. It's been great. (5/5)

With the first attack by the Sharg now passed, the cadets are transferred with their mechs from the now-compromised training facility to central command. What awaits them is not what they expected. This series is unfolding nicely from a miniseries to an ongoing monthly, and this issue kicks the storyline up by a notch. The anime-style narrative is working really well here, particularly because it is being paired with Miyazawa's less anime-style visuals. The influence is definitely there, but Miyazawa wisely gives it its own identity too. (4/5)

When we last saw Luvander and Prince Aki, they were plunging down a deep hole in the ground. It turns out they're still falling. This issue has some great character development and action, and progresses in a very different fashion to what I had expected. Galaad's vivid artwork continues to impress, particularly in just how evocative and atmospheric it can be with such such simple linework and colouring. This issue feels like the end of a story arc, which is a little unexpected as there's already a trade paperback collecting issues #1-#5. It leaves me intrigued as to what happens next for this monthly series. (4/5)

The new Sinister Six are finally ready to steal a SHIELD helicarrier - unless Miles breaks his deal with his uncle Aaron (the new Six leader) and attempts to stop them. There has been quite a lot of build-up to this heist, and it plays out in an expected and entertaining fashion. Bendis also finds time to push along all of the other long-running character threads as well, which has always been his gift. Oscar Bazuldua's artwork is cleat and well-proportioned, and retains this book's signature widescreen style. I have no idea how many more issues of Bendis' Spider-Man we have left (DC is already advertising his forthcoming Superman run), but it's worth treasuring this run while it's still here. (4/5)

After 11 issues of build-up, this appears to be where the proverbial shit hits the fan. IO finally launch a major data attack on Skywatch, unaware that Skywatch's best operative has had ears in the room the entire time. The attack coincides with a raid from the Halo Corporation right under their noses. This issue crackles with energy, and uses a skifully composed form and structure. The action is great, the dialogue is sharp, and it sets this series off into a much more dangerous and energetic direction. This series is rapidly developing into a must-read. (5/5)
Posted by Grant at 12:01 PM