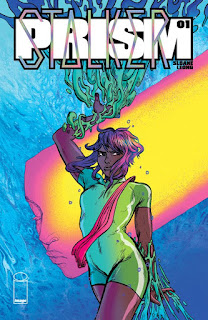 Vep is a refugee, picked up from a planetary disaster and deposited inside some strange biological environment. She and her fellow prisoners work farming alien eggs in return for shelter. One day Vep is picked out from the crowd for resettlement - whether she wants resettling or not.

Prism Stalker is a new ongoing science fiction series from writer/artist Sloane Leong. While the artwork is relatively ordinary, it is vividly coloured - and that lifts the overall visuals up remarkably well. It has a richness that really suits its surreal, alien environment.

The script is stronger, establishing a setting and protagonist in an effective manner. It is a potent premise for a series, given the number of real-life refugees around the world, and shows plenty of potential for both future story directions and world-building. It's a new comic worth checking out and seeing how it develops. (3/5)

Under the cut: reviews of Monstro Mechanica, The Spider King and Superman.

In the aftermath of the Siege of Volterra, Lorenzo de Medici arrives to survey his victory while Isabel and Da Vinci struggle to restrain the automaton. This book has such a nice streak of historical drama through it, with the dialogue peppered with little references to the real-life Italian Renaissance. For the casual reader these just give a lovely sense of a world beyond the immediate characters. For those who know their history, they are a whole extra level of entertainment. This continues to be a hugely entertaining combination of history and science fiction, with nice and distinctive artwork. (4/5)

With the death of his father, young Hrolf becomes a viking chieftan. A few years later everything has fallen to ruin, and his total defeat is only averted by the most unexpected of genre segues. Josh Vann has written an absurd and bleak comedic adventure, with an incompetent protagonist and a smart plot twist that pushes the story from mildly interesting to hugely enjoyable. Simone D'Armini's artwork is boldly inked and atmospheric, with a cartoonish sense of the stark and grotesque. It's all a little too busy, but there's a lot of potential. (3/5)

If I am to be honest, I have never particularly liked Bizarro. He's a silly reverse Superman who talks in convoluted backwards-talk, and is a lumbering comedic idiot. There was an attempt to re-imagine the character during the New 52 as an abortive attempt by Lex Luthor to make his own Superman. I note that in this issue we see to be back to a parallel universe version. Patrick Gleason's artwork is superb, but the story struggles. Early scenes set in the "Bizarroverse" just feel irritating. Things are more enjoyable when we're back on Earth with the Kent-Lanes, but as this is the first issue of a story arc you know Bizarro's going to stink up the place for a few more issues. (3/5)
Posted by Grant at 1:18 PM