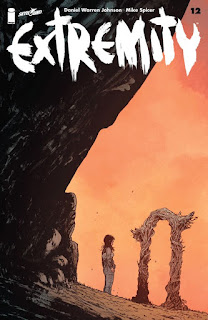 The Roto and the Paznina face each other in one final battle - unless Thea can stop them both. With Shiloh transformed, that may not even be possible any more.

Extremity ends, after 12 sensational issues, and it's almost certainly the best comic of its genre from the past year or two. It's combined a sort of Miyazaki-esque sensibility with a stunningly developed post-apocalyptic world, strong characters, and Johnson's striking and deliberately rough, emotive artwork.

The entire series has been based around the damage caused by war, and the futility of violence, so it is not a surprise that the climax would be focused so closely on one final pitched battle. While unsurprising, it is absolutely not a disappointment: instead it feels perfectly appropriate and hugely satisfying. In essence, Extremity ends the way the reader should want it to. There is a resolution. There is heartbreak. Things are both won and lost. While one could conceivably keep some sort of story going from this point, it would never be as strong as leaving this world and characters right here. This has been one hell of a good series. (5/5)

Under the cut: reviews of Batman, Giant Days, She-Hulk, and The Wicked + the Divine.

Another positively gorgeous instalment of "Everyone Loves Ivy", in which everybody in the entire world has fallen under Poison Ivy's direct control. Adults, children, every superhero, everyone - except for Batman and Catwoman. The first part of this storyline felt a little short and hollow. While there's still a fairly decompressed sense to the story, this second part thankfully has quite a bit more dramatic meat. It also has some genuinely great dialogue between its two leads. Tom King is selling the Bruce/Selina romance like no writer I can recall. It's great. (4/5)

It is the end of the second year of university, with the girls separating to new living arrangements and Daisy finally forced to make a choice over staying in a toxic relationship or finally saying goodbye. The light, warm humour remains infused without, but with a strong sense of closure this issue feels more involving than most. Then a last page twist throws everything back into disarray. This is such a soap opera of a comic, but like all good soaps it's got me hooked now. I will never stop reading. (4/5)

And another iteration of She-Hulk bites the dust. Jennifer's adventures never quite manage to sustain a long-term readership, but they always return when she gets relaunched a few years down the line. She's that kind of a character. This latest volume started so strong, with a traumatised Jennifer working through her rage over cousin Bruce Banner's death in Hulk-like fashion, but seemed to get caught up in the whole abortive "Legacy" relaunch with a renumbering and then just one final short story arc to wrap things up. This epilogue is just a delight, and should remind readers precisely why, in a few years, they'll all be back. She-Hulk is just a brilliant character. (5/5)

The final year begins, with a trip back 6,000 years into the past and then the long-awaited return to the here-and-now. Both are great, but it's the ancient history prologue that really sparks with style and imagination, and particularly striking artwork by Jamie McKelvie. When the entire series is over (currently planned for mid-2019) I am heading right back to the beginning and re-reading the entire saga from scratch, because the long-term plotting and character development of this book has been absolutely astounding. (4/5)
Posted by Grant at 12:40 PM