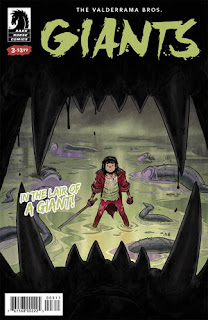 Brothers-in-arms Zedo and Gogi have been separated. Gogi finds himself drawn into a new family of orphans on the ruined surface, dodging giant monsters while discovering a better life. Zedo is still trapped underground, hoping to use his discoveries to curry favour with a local violent gang of youths.

Both storylines play out in parallel, and each has its own combination of character development and action. This has been an excellently paced miniseries, with efficient and intriguing world-building combining with solid and engaging characters. One scene in particular stands out, as Gogi comes face to face with an injured giant hiding in a cave. The Valderrama brothers absolutely nail the tension and awe of the scene.

Their artwork is tremendous: it shows quite a strong influence from Japanese writer/artist Katsuhiro Otomo, who is one of the more interesting artists upon which to develop one's own style. A typically subtle colour palette allows the moments of big action to really pop out and show contrast. If the last two issues of Giants are as good as the first three, then this could wind up being one of the top comic books of 2018. (5/5)

Under the cut: reviews of The Black Monday Murders, Deadman, Judas, and Rocko's Modern Life.

The Black Monday Murders return after a prolonged absence. It's been long enough that reading this issue was met with that irritating strain to remember precisely what had been going on, but once that's clear it's a strong and very effective story arc climax. Not only is it satisfying to read, it doesn't immediately spotlight where things are going next; that's an ambivalence that I love. Tomm Coker's realistic, sketchy artwork remains superb, and the unusual presentation - favoured by Hickman in many of his creator-owned works - continues to impress. (4/5)

Boston Brand's hunt for his brother's fate gets complicated, as it draws him ever-closer to the immortal Ra's al Ghul. Guest appearances by the Spectre and the Demon help to give this a wonderful sort of old-fashioned 1970s appeal, and the story even manages to come together a bit better than earlier issues and make a broad sort of sense. Neal Adams' artwork remains the main drawcard here: a bit looser than in his younger days, but immediately recognisable and great to see. It is always worth revisiting an old master's work, and while his storytelling appears to have gone mildly off the wall Adams the artist has definitely still got it. (3/5)

Writer Jeff Loveness is clearly drawn on a lot of apocrypha to generate this memorable and elegant four-issue miniseries about Judas in hell. One always wonders, when a work is presented that focused on Christian mythology, whether it is going to be a slavish work of devotion or a deliberately controversial affront. Judas really does chart a narrow middle course: its respectful, but also slightly challenging and insightful. If anything it seems a story about late redemption and doubt, both of which suit their title character wonderfully. Given the material it's not going to be to everyone's tastes, but it certain is to mine. Jakub Rebelka's art and colours are sublime. (4/5)

Rocko the wallaby is back in comic book form to appeal to 1990s children's television junkies the world over. It's a nice adaptation of the cartoon, managing to keep its bright, slightly too frantic, and slightly (and suspiciously) edgy tone. Ian McGinty's artwork does a nice job of balancing the original television designs and finding his own artistic identity. A short back-up strip by Tony Millionaire is a pleasant bonus at the end as well. Like Oni's Invader Zim comic, this is a well pitched continuation of a beloved bit of pop culture, and while better than what readers deserve isn't likely to ever rise above being a pleasant and nostalgic diversion. (3/5)
Posted by Grant at 5:41 PM