Highlander: The Series: "The Sea Witch" 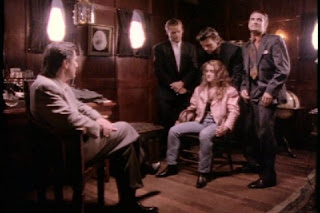 It is 5 December 1992, and time for another episode of Highlander: The Series.

Richie (Stan Kirsch) runs into a former friend, which leads to both of them getting chased down by a local drug syndicate. When Duncan (Adrian Paul) gets involved, he discovers the drug kingpin Alexi Voshin (Stephen Macht) is the same immortal that betrayed him in 1938.

I can go no further in reviewing this episode until I express how disappointing it is to watch an episode of a fantasy television series titled "The Sea Witch", only to discover that the titular witch is not a witch at all, but rather the name of a 1938 Eastern European cargo ship. Way to let the audience down from the outset. On its own, the title suggests any number of cool stories and characters. In reality, "The Sea Witch" is a staggeringly dull waste of time.

The story is just remarkably weak: Richie gets into one altercation rescuing an old friend from his days on the street, only to follow into a second - in which she steals a batch of drugs from local armed dealers. That friend, Nikki (Johanna Newmarch), spends much of the episode sulking around the art gallery with her young daughter, while being defensive against Tessa (Alexandra Vandernoot).

When it comes to Duncan, the realisation that immortal fiend Alexi Voshin is the drug kingpin from which Nikki is hiding sends him into a flashback to 1938 Leningrad, where Voshin betrays a group of refugees that Duncan was attempting to help. It's a nice period scene, with director Thomas J. Wright applying a neat sepia tone to the picture to emphasise its historical setting. Sadly the scene really does not link up or tie in to the present-day narrative. While Stephen Macht delivers his character with a certain European flamboyance, in the end he comes across as all talk and little actual villainy. The climactic duel - onboard the cargo ship Sea Witch II - feels a little weakly choreographed and shot, although the night-time shoot does provide a certain element of atmosphere.

This is not the worst episode of Highlander so far, but it is almost certainly the least interesting. After nine episodes, we're still only at two good ones. That makes for a quality ratio of 22 per cent. In all honesty if it wasn't for a savvy co-production deal and a lot of European distribution, Highlander would never have made it past its first year.
Posted by Grant at 5:22 PM