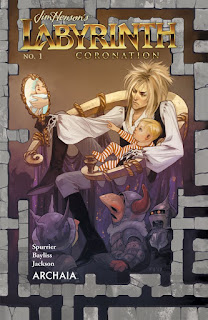 Archaia have enjoyed huge success over the years with a string of Jim Henson-derived titles, including comics and graphic novels based on The Dark Crystal, Fraggle Rock, The Storyteller and even long-forgotten unfinished Henson works like A Tale of Sand. Last year they hit a creative goldmine in adapting the abandoned sequel The Power of the Dark Crystal, and for a follow-up they have understanding gone to Henson's beloved feature film Labyrinth for an all-new 12-issue maxi-series.

On the face of it, it all seems like a wonderful idea. They have hired excellent writer Simon Spurrier to script the new project, and decent artist Daniel Bayliss to illustrate it. Sadly once you begin reading the first issue, it all falls into a bit of a heap. It's a prequel.

Yes it's decently written, and yes the art is solid, but at the end of the day no reader needs to know the origin story of Jareth the Goblin King, memorably performed by David Bowie in the original film. Prequels do not provide drama or suspense; at their best - and I find that rare - they offer character insight, but most often they deliver trivia. The hard-core may adore the chance to see how he got to the Labyrinth. For me it's a mystery I never wanted solved. (2/5)

Under the cut: reviews of Darth Vader, Detective Comics and Doctor Strange.

Someone is trying to murder Darth Vader, and they have somehow managed to make it appear that the Emperor gave the order. He didn't, and finding the true identity of his new enemy is forming the core of this third story arc. Camuncoli and Orlandini's artwork is really getting impressive, and now that the initial awkwardness of Vader's early days seems over we're back to satisfying murderous villainy that this title does so well. Sure, sooner or later the shine will wear off, but for now Vader cutting a homicidal swathe through the galaxy has a lot of appeal. (4/5)

Clayface is dead, shot by Batwoman. While Batman assembles his allies to determine what to do with a murderer in their midst, Batwoman is facing a difficult decision of her own: whether or not to join her father's private army, becoming an enemy of Batman's in the process. This is the heavy, dramatic issue that I wanted last fortnight, with the full ramifications of Kate's actions bearing down on both her and her friends. It's the best issue of Detective Comics in a long while. (5/5)

So we only just started a Doctor Strange miniseries titled Damnation, which looked like it was going to be a fun little four-part adventure separate to the monthly book. Sadly we're instead in tie-in territory, and in a particularly redundant way: about half of this issue re-tells issue #1 of Damnation despite pretty much every reader having already read that earlier issue a week ago. Niko Henrichon's scratchy artwork is certainly an acquired taste; I've enjoyed it in the past, but it doesn't seem the best fit here. Donny Cates' script is okay, but only when it's not retreading ground. (2/5)
Posted by Grant at 12:05 PM