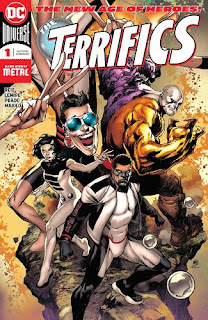 Finding Metamorpho being used to open a gateway to the Dark Multiverse, Mr Terrific and Plastic Man dive in to save him - getting dragged into another dimension in the process. There they meet Phantom Girl, and begin an all-new adventure as the DC Universe's newest super-team.

I have to spoil the last page of this comic to discuss it, so fair warning if you don't want to know.

Broadly speaking I really like this issue. It would have been nice to have gender parity, or even a predominantly female super-team, given the genre's historical penchant for all-male groups bar one woman. That aside, it's a solid group of second-string heroes whom I have often enjoyed, and they are well-written by Jeff Lemire and very nicely illustrated by Ivan Reis and Joe Prado. Then their first mission is revealed to be tracking down the mysterious Tom Strong - that's where the issue kind of lost me (albeit on the last page).

That would be the Tom Strong created by Alan Moore and Chris Sprouse for Wildstorm's America's Best Comics in 1999. A character picked up by DC Comics as part of a wholesale buyout of Wildstorm, and now incorporated for the first time into DC's continuity. This was never Moore's intention, but it forms part of a growing obsession with DC's editorial division in shoe-horning whatever Moore creations they own into whatever they're currently publishing. Watchmen reborn in Doomsday Clock. Tom Strong appearing in The Terrifics. Promethea in Justice League of America. It feels tacky. It feels ugly in the most corporate of fashions. Moore doesn't want this, although at this stage I suspect he's simply washed his hands of the whole affair. Moore's fans likely don't want it either, at least not the majority. That leaves people who don't even know who Tom Strong is, at which point DC would be better off expanding their IP with new characters. This is a neat little comic with a really mercenary edge; what's a reader to do? (3/5)

Under the cut: reviews of Batgirl, Doom Patrol/Justice League of America, and Mera: Queen of Atlantis.

An old foe returns without warning in the second part of "Cold Snap". It's a nice use of this volume's own continuity and ongoing story elements, helping to give it its own identity and content beyond simply continuing what was done in last volume's "Batgirl of Burnside" issues. It is upbeat, well paced and wonderfully characterised. Hope Larson has absolutely nailed her version of Batgirl, making this one of DC's most regularly fun books to read. Sami Basri's artwork is strong, and keeps the same general aesthetic established by Chris Wildgoose. (4/5)

I was not a fan of the overly busy, quite messy first part of this crossover between Doom Patrol and Justice League of America. This second half, while far from essential, is a much more entertaining read. For one thing it flows a lot better now that everything has been set up. For another, the artwork by Eaglesham and Derington has a hugely appealing look, as well as strong and vivid colouring work by Bonvillain (rapidly becoming a favourite) and Louise. (3/5)

A love interest and supporting character to Aquaman for decades, Mera now gets her first-ever - and somewhat overdue - solo miniseries. Spun off from the current Atlantean civil war story arc in Aquaman, this first issue sensible re-caps anything a new reader needs to know to follow what happens next. It's not exceptional stuff, but it is solidly written and illustrated - and certainly entertaining enough to support a great character. A last page hook promises a strong story going forwards. (3/5)
Posted by Grant at 12:02 PM