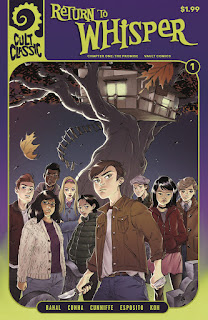 15 years ago a group of teenagers stole a map to a hidden treasure and buried it, planning to come back as adults - when the heat had well died down - and collect the treasure for themselves. Now those 15 years are up, and the group has come back together. It's not to collect the treasure, but because one of their number has died - and it may not have been an accident.

Cult Classic: Return to Whisper, by writer Eliot Rahal, artist Felipe Cunha and colourist Dee Cunniffe, is another nostalgic crime book based on children and adults crossing paths. We have already had the likes of 4 Kids Walk Into a Bank and Night Owl Society, and now Return to Whisper adds its own personal wrinkle to the formula.

The balance between youthful flashbacks and present-day adult life works well, and certainly the stakes get raised a lot faster than I had expected them to be. Cunha's artwork has a simple, independent style that seems par for the course for this kind of a book. There are perhaps a few too many characters - and it's difficult to get a handle on at least half of them - but this is a first issue, so there's always time to get to know them. This is a solid book, but not an exceptional one - the US$1.99 price tag works well in its favour though: a cheap opportunity to test the waters. (3/5)

Under the cut: reviews of Action Comics, Rat Queens, Saga and X-O Manowar.

Superman and Booster Gold are trapped in a potential future where General Zod has taken over an entire planet. Meanwhile Lois and Jonathan appear to have died in the present - just how firm are the rules governing time travel? This time-travelling story arc feels terribly stretched, and has never really managed to step up the pace or the urgency. If anything, it feels like wheel-spinning before the historic issue #1,000 hits in a few weeks. There's the possibility that the choices made at the end of this issue will come back to haunt Booster, but that potential doesn't really save this specific issue. (3/5)

Another jump forward in time - the last was only eight issues ago - and now Hannah is being sent to a prison for life following some unmentioned misdeed. Thankfully we see quite a bit of what led to this point within this issue - there's still stuff in the gap between this volume and the last that I'm not sure is ever going to be revealed. The long-running mystery of disappearing people is still running, and seems to be reaching an actual climax. This remains a solid and entertaining book, but since returning with new artist Owen Gieni (who's great) everything has felt a little uncertain and off-kilter. I keep hoping for the rock-solid storytelling of the early issues will return. (3/5)

A new story arc, a little further into the future, and a whole new set of interpersonal issues and crises building for the galaxy's most wanted fugitives. One of the greatest parts of how Vaughn writes Saga is how you can never be completely sure which character is going to suddenly seem sympathetic. It's usually sudden and tremendously impactful, but this issue throws a real surprise in the shape of Robot IV. It makes sense. It suits his character. It - and his cliffhanger revelation - throw another curveball at the readership. It's always great to have Saga back for another arc. This one - the ninth - seems to be no different. (4/5)

After liberating its disparate species, Aric was emperor of an entire planet. Then he turned out to be a bad king, and a group of mercenaries were hired to murder him. Left for dead, but still fighting, Aric sets out on a warpath to get revenge. This issue is going to be hugely satisfying to long-term readers of X-O Manowar, but importantly it also works as an entertaining and action-oriented science fiction comic as well. This has been a sensational arc, and now that it's approaching a potential climax each issue seems more exciting than the last. If you read superhero comics, or have a love for planetary romance, you should already be reading this book. (5/5)
Posted by Grant at 6:57 PM