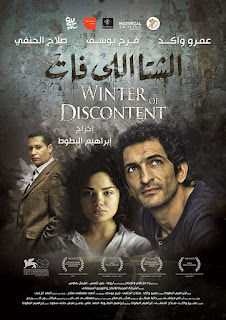 Art has always been a powerful tool for political discourse, and cinema is clearly no different from any other medium. Ibrahim El Batout's 2012 drama Winter of Discontent is a strong example of that. It depicts the chain of events in 2011 that started with protests in Cairo's Tarhir Square and snowballed until they forced the resignation of Egyptian President Hosni Mubarak. Shot shortly afterwards, and released within a year, it is to an extent a film without a conclusion: history had not yet provided one. As a powerful representation of a collapsing regime and the strength of the people, it is near-faultless.

Amr (played by Amr Waked) is a political dissident who was taken from the streets and tortured by the Egyptian secret police in 2009. Two years later he observes pensively as the people begin to rise up against their oppressive government and demand a revolution. His ex-girlfriend Farah (Farah Youssef), with whom he separated after his ordeal, now co-hosts a pro-government television talk show while secretly struggling with the ethics of lying to the Egyptian people. As the events on the streets grow in scale and violence, both Amr and Farah are drawn into the conflict.

Winter of Discontent is clearly a low-budget film, with a limited cast and taking place essentially in a variety of quiet back streets and small rooms. El Batout uses the limitations to profound advantage, sculpting the narrative into a haunting and claustrophobic series of vignettes and conversations. It is an approach that accentuates beautiful camera angles and gentle tracking shots, and gives the most simple of scenes weight and resonance.

Waked and Youssef are extremely engaging leads. So much emotion is played in silence throughout the film, as well as plenty of ambiguity and open-ended moments. Also strong is Salah Alhafany as Adel, the secret police commander who personally oversaw Amr's interrogation and torture. His evil is horrifyingly banal, and as a result remarkably realistic and believable.

Around the film's fringes are a range of fascinating supporting characters: neighbours, family members, old acquaintances and bored policemen. In one stunning sequence a group of men are captured from the street and interrogated over their participation in anti-government demonstrations. 'My relationship with politics is purely sexual,' one young man proclaims. That is a line that resonates well past the film's conclusion.

When that conclusion does come, it is with commendable melancholy and foreboding. Mubarak may have resigned, but Egypt's struggles did not end with his departure. Winter of Discontent concludes in a remarkably bold and open fashion. It's a fantastic little film.
Posted by Grant at 4:36 PM