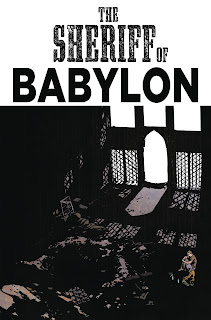 I have written a few times about The Sheriff of Babylon, the exceptional DC Vertigo miniseries from writer Tom King and artist Mitch Gerads. It follows American military contractor Chris Henry, sent to train new police officers in post-war Iraq. He is drawn into a criminal investigation along with Nassir, who seems like the last decent cop Baghdad has, and an elusive criminal underworld figure named Sofia. It is an exceptional and intelligent crime drama with a beautiful pace and panel layout, great artwork by Gerads, and a striking sense of realism - prior to writing comic books King was a CIA operations officer.

The book is obviously capturing some attention, because DC recently extended its run from 10 issues to 12. This latest issue, the fifth, is an excellent example of why the book works so well. Previous issues have involved tense negotiations, explosive action and a rapidly evolving storyline. Issue #5 is a late night conversation between Chris and Nassir's wife Fatima. The change in pace is remarkable, and welcome. It allows for an extended piece of character development for both of them, and showcases subtle artwork by Gerads and intelligent dialogue by King.

There's going to have to be a particularly great comic book in the next eight months to stop The Sheriff of Babylon from being my favourite of the year. It really is a superb work. (5/5)

Under the cut: reviews of Amazing Forest, Ninjak and Poe Dameron.

While far from faultless, Amazing Forest has been a fascinating little anthology series, in which a varied range of artists have illustrated short comic stories by Erick Freitas and Ulises Farinas. This fourth and final issue includes four different stories. "Edith and the Murderbot", which is a pitch-black little science fiction horror story, has beautiful woodcut-inspired artwork by Jelena Djordjevic and is easily worth the purchase price alone. "Caballo del Morte" boasts stunning colouring by Victor Duchalski, but is an incoherent mess. "Dog Eat World" is flat-out weird, and very reminiscent of the old "Future Shock" strips in 2000 AD: enough room for a set-up, and an odd twist. The final story, "The Last of the Hugaboos", is another really weird effort that is ultimately only partly successful. That's the thing with anthology comics: you're almost always going to get a mixed bag. (3/5)

When it comes to ongoing comic book titles, it is always good to keep an eye out for jumping-on points: after all, it's easier to buy into a title at the beginning of a storyline rather than halfway through it. This is one such point: superspy Colin King, aka Ninjak, has just returned from a mission to have someone attempt to bury him in his own family mansion. Tightly composed artwork and a fast-paced script both help to make this a really entertaining action comic. It's easy to follow, hooks the reader in effectively and ends with a pile of intriguing questions in the air. Once again Valiant produce another solid, entertaining superhero book. (4/5)

Marvel's line of Star Wars comic book finally expands to the current generation with this ongoing series based around Resistance pilot Poe Dameron. In one sense it's an odd choice, since of the new characters he is easily the most under-developed. On the other hand that kind of makes him the perfect choice, since there's a largely blank canvas with which writer Charles Soule can work. This first issue is not the most inspiring of stories, but it does leave enough potential open for the book to improve in future issues. Phil Noto's artwork doesn't quite suit the book, to be honest: part of the appeal of a Poe comic is thrilling dogfights between X-Wings and TIE fighters, and Noto's artwork is simply too static to give any sense of speed or energy. It's a major drawback. If I was Marvel I would be shifting artists as soon as this first arc is complete. (2/5)
Posted by Grant at 10:35 PM