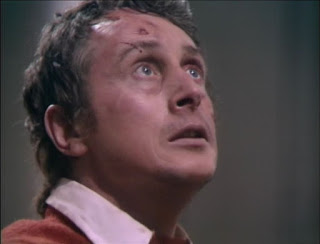 It's 2 July 1975, and time for another episode of Survivors.

While the community of survivors head out to make hay for livestock, Vic (Hugh Walters) finds himself increasingly despondent at his failure to contribute. His depression hits a peak with a failed suicide attempt - at which point the community is visited by Donnie (Robert Tayman) and Anne (Myra Frances), the woman who left a crippled Vic to die six months earlier.

Writer Jack Ronder returns to Survivors with a much stronger instalment than his last effort ("Starvation"), and a third and final instalment to Vic's loose trilogy of episodes. When we first met him in "Genesis" his legs had been crushed by a rolling tractor, and Anne's deceit led Greg (Ian McCullough) to unwittingly leave Vic to die. In "Spoil of War" Greg found Vic still alive in the quarry where he'd been left, and brought him back to live with the community. Now Vic finally gets to come face to face with the woman who abandoned him, and precisely at the point when his emotional state is at its most pressured and unstable. It is a strong recipe for character drama.

It is nice to see the series actually tie this narrative thread up, as it is already demonstrating a pretty irritating penchant for introducing and then abandoning characters. Two more people joined the community in the previous episode: new mother Laura and her friend Norman. Norman has straight-up vanished without a trace. Laura is mentioned twice, along with her baby, but we never actually see her.

Myra Frances does an excellent job as Anne, particularly since Ronder's script gives her the opportunity to show a little depth and humanity. Her earlier appearance had simply presented her as a spoiled, rich socialite, whereas now she seems significantly more brittle and human. There is an engaging arc to her character as the episode goes on, from arrogant presumption to genuine terror of meeting Vic face-to-face to a sort of emotional resolution by the episode's end.

For Vic himself it's a bit of a struggle. We don't see him face-to-face or even hear his voice until he's already attempted suicide. When he is revealed immediately afterwards he has a bloody graze across his cheek and is played by an entirely different actor: Terry Scully being replaced by Hugh Walters. Walters does a very good job with the role, and to be honest it does feel very acceptable to have him in the role by the end. On the other hand it does feel like the attempted suicide was a foolhardy attempt to explain why the character suddenly looked different. Suicide is a huge bomb to drop on any narrative drama, and if it is not expressed and explored properly it very easily feels cheap and lazy. That is certainly how it feels here.

There is some strong writing in this episode, notably a few scenes in which Vic - tasked with education the community's two young children - tells an abstract children's story of what happened to him and Anne. By abstracting the story and telling it to a pair of children it takes on a much more haunting, emotional quality.

This is the eighth good episode out of 11. While imperfect, Survivors really is demonstrating a knack for a dark, slightly cynical vision of a gentle apocalypse. It remains a very British take on the end of the world, and generally remains very enjoyable. The quality ratio rises to 73 per cent.
Posted by Grant at 4:10 PM