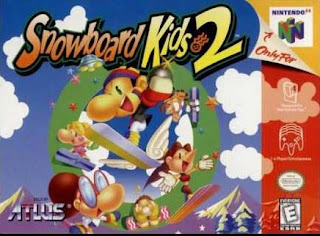 It's not really spoiling anything to admit that Mario Kart 64 is one of the higher-ranked videogames in this Nintendo 64 countdown. For one thing it was such a great party game, with four players playing simultaneously in races. As with all videogames though, sometimes you can play a game too much and start craving some variety. You find yourself looking for a solid back-up: similar sorts of games but with different race tracks or mechanics, and so on. As a kart racing substitute, Snowboard Kids 2 was one of my go-to titles.

Japanese developer Racdym produced the original Snowboard Kids in 1997. It is a great game in its own right, but as soon as the sequel was released I found I simply didn't feel the desire to play the original any more. This is another example of how the iterative improvements in videogames often make the sequels better games than their predecessors. Snowboard Kids 2 boasts better graphics and level designs than the original game, and small tweaks here and there clean up and improve the gameplay. There is nothing particularly ground-breaking in the sequel, but it is a noticeably superior game.

The use of snowboards, and with it a downhill track, gives the game a sufficiently different vibe to the standard kart racers to make it feel fresh and distinctive. In many respects it is just a superficial change, but it is one that really works. I played this game a hell of a lot back in the early 2000s.

Snowboard Kids 2 was released in the USA and Japan, but for whatever reason never received a European release. The only PAL format cartridge was released exclusively in Australia.
Posted by Grant at 8:24 AM