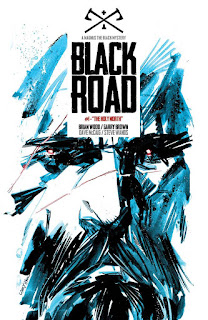 Some years back Brian Wood wrote an excellent DC Vertigo series titled Northlanders. This wonderfully researched ongoing book told a series of stories about Vikings from all points of European history. They were rich in character and full of drama. Northlanders is still one of my favourite Vertigo titles. More recently Wood teamed with the excellent artist Garry Brown on The Massive. Now Wood and Brown are teaming up once again on Black Road: a continuation of both their collaborative partnership and of Wood's work with Viking history.

The book, subtitled "A Magnus the Black Mystery", introduces Magnus - a strong warrior hiring himself out to kill or defend people on the road. He lives at a time when Christians are swarming up the Norwegian coast, replacing the old religion with a new one and doing a fairly violent job on anybody bold enough to resist. In this new world Magnus agrees to escort a Cardinal up the dangerous 'black road'.

It is a well-written and evocative issue, which takes a surprisingly even hand on Christianity in a story that could easily flat-out demonise it. It also creates a strong hook into the next five issues. It's great to see Wood and Brown together - they're still working on The Massive: Ninth Wave of course (see below) - and it's great to see Wood back in a historical setting with which he works so well. (4/5)

Under the cut: reviews of Black Canary, Gotham Academy and The Massive: Ninth Wave.

Black Canary is back in Gotham with Batgirl after a ninja death cult has fixated upon her to teach them a specific and obscure martial arts manoeuvre. It's a cue for what Black Canary has been doing best: fun storylines, engaging and amusing dialogue, and a great sort of indie rock sensibility that has really set it out from its contemporaries at DC. It's a real joy to read Canary and Batgirl team up again, Birds of Prey style. All this and my favourite cover for the week too. (4/5)

Comments I have made about the last few issues of Gotham Academy continue to stand here: this anthology approach for the "Yearbook" story arc is giving a lot of cool writers and artists the chance to play with the Academy characters, but they're doing it at the expense of any serious momentum on the book - which has been killed stone dead. As an annual this yearbook concept would have been perfect. As a multi-issue story arc it has long outlived its welcome, and that's distracting from what are some pretty great short-format stories. (3/5)

Two Wood/Brown comic books in a week! Trouble hits Ninth Wave when they elect - against their standard eco-activist remit - to escort a group of civilians from a warzone to safety. It brings a lot more trouble than Ninth Wave leader Callum Israel was expecting. This is another short, sharp, perfectly composed one-shot from a mini-series of such one-shots. It's nice to read issues like this that are intelligent, concise and entertaining. (4/5)
Posted by Grant at 11:39 PM