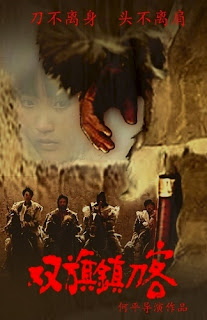 He Ping, the Chinese director best known for his international arthouse hit Red Firecracker Green Firecracker, is also the director of an intriguing trilogy of 'Chinese westerns'. In these films He developed a combination of wuxia-style stories of heroic feudal warriors fighting evil in China's distant past with an aesthetic borrowed liberally from Sergio Leone and other Italian westerns of the 1960s and 1970s. It is a curiously successful blend. I had previously reviewed Sun Valley (1996), the second film of the three, and many years ago I had the opportunity to see the third - Warriors of Heaven and Earth (2003) - on the big screen. Swordsmen in Double Flag Town (1991) is the first of He's thematic trilogy, and it is a starkly told and effective sword-wielding western.

A teenager named Hao Ge (Gao Wei) travels across the western desert region of China to a small walled village known as Double Flag Town. He is there on the dying command of his father, a noted swordsman, to track down a crippled restaurant owner (Jiang Chang) and marry the man's daughter Hao Mei (Zhang Manna). When Hao Mei is almost raped, Hao Ge murders the assailant. When the assailant's brother arrives in town - a notorious and violent swordsman known as One Blow (Sun Haiying) - Hao Ge must stand against him or see the entire village slaughtered.

When I viewed Sun Valley I found it a little too introverted and ponderous to really entertain, despite strong performances and beautiful visuals. Swordsmen in Double Flag Town almost feels its opposite. It presents a very simple story, told with cleanly drawn and uncomplicated characters, and shot and plotted exactly as a spaghetti western would be. A stranger arrives in town, and romances the local bartender's daughter. He does not wish to fight, but a gang of outlaws threatening the town give him no choice. It even climaxes with a noon showdown in the main street. It is even set in the west - albeit the Chinese west instead of North America.

He Ping exploits the desert setting wonderfully, filming his exteriors on location in what appears to be a genuine half-ruined walled village. The sandstone walls are half-eroded away, and the people - mostly cast from local non-actors - have a tanned, weary look. Much like Sun Valley after it, the film has a remarkably strong sense of place.

The characters are very simple, but are performed with sufficient skill to make them work effectively. Gao Wei is particularly strong as the young and earnest Hao Ge, who is clearly well out of his depth but shows a surprising talent with a pair of short swords. Zhang Manna has a more difficult role, saddled with a female lead who seems to spend much of the film moaning and crying. It makes her a rather difficult character with which to properly engage.

The film's sword-fighting sequences are remarkably sudden and brief, owing more to Japanese chanbara films like The Tale of Zatoichi than to any sort of American or Italian western. Most of them only last one or two blows before somebody is keeling over stone dead. The climax is a near-masterpiece of gradual suspense, as One Blow and Hao Ge slowly draw closer despite several well-meaning villagers attempting to get between them.

Admittedly this is a film with fairly low ambitions, and as a result it has a comparatively easy job of satisfying its own requirements. As a stripped-back, 90-minute genre piece, it is enormously watchable and effective.
Posted by Grant at 12:04 AM