Crusade: "The Rules of the Game" 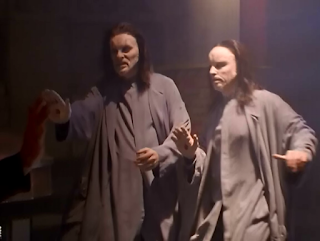 Gideon (Gary Cole) needs permission to land on the planet Lorka 7, in the hopes that a long-dead civilization there may provide a cure to the Drakh plague. This brings the Excalibur to Babylon 5, where he attempts to negotiate with the suspicious Lorkans who now live on the planet. While on the station Eilerson (David Allen Brooks) meets his ex-wife, and learns she is heavily in debt to a local loan shark.

"The Rules of the Game" is a messy and underwhelming episode, one that appears to rehash old and well-worn Babylon 5 plot elements without anything particularly new or innovative to justify it. It is typical of what seems to be the Crusade formula: reheated leftovers from an earlier and better series, produced with what strikes me as a surprising lack of enthusiasm. I don't get the sense that anybody is enjoying making this show: not the cast, not the production team, and certainly not the writer. J. Michael Straczynski is absolutely writing on automatic here.

The most enjoyable part of the episode involves actively laughing at it. Tim Choate, who played Zathras in several episodes of Babylon 5, plays a Lorkan priest here with a ridiculously silly voice and a bizarre set of unintentionally funny hand gestures. When he's on-screen it is impossible to pay attention to anything else, and with his weird gesticulations and voice it is impossible to treat him seriously. This causes serious problems when the Lorkans - there are only two of them - decide to murder Gideon and Captain Lochley (Tracy Scoggins). There's simply no threat to them at all. Add in that his weapon is a plastic red gem glued to his hand, and that the fight choreography largely involving actors falling on one another, and it all falls to bits pretty resoundingly. There is not even a proper justification given to why they want Gideon dead, just some hand-waving about smuggling artefacts.

Gideon and Lochley continue to develop a romance, culminating in a shower scene shot in silhouette with saxophone-enhanced music. It is at this point I came to believe that not only had Straczynski given up on Crusade, but he had elected to mock his audience at the same time. It's jaw-droppingly bad television.

Meanwhile Max Eilerson stumbles into his ex-wife. It feels like a lot of people in the Babylon 5 universe get into trouble thanks to their exes. Garibaldi had one. Talia Winters had one. Sheridan got two: Lochley and Anna. It makes Eilerson's little adventure here feel particularly tired and derivative. At one point I honestly thought Eilerson was going to stone-cold murder the man extorting money from his ex-wife, but alas he merely did the usual Babylon 5 plot resolution wherein he attached a bomb around the guy's neck and told him if he came within 10 feet of Eilerson or his ex the bomb would explode. I suppose it's lucky the extortionist doesn't have a gun. Or friends.

I note in particular that part of the extortionist's scheme to force Eilerson to pay him 50,000 credits involves kidnapping a pet cat back on Earth. That's sort of Crusade in a nutshell: Babylon 5 was about a war between ancient civilizations capable of bringing a galaxy to total annihilation. Crusade is about kidnapped cats.

We're seven episodes into Crusade, basically the halfway mark, and only three of the episodes particularly qualify as 'good'. That leaves the quality ratio down at 43 per cent. My gut tells me it's going to fall lower.
Posted by Grant at 5:01 PM