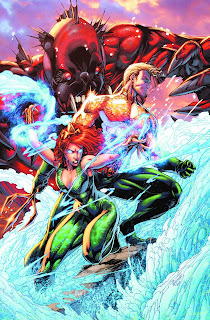 Like all of the original New 52 books still running, Aquaman has hit its magical 50th issue. To an extent I am mildly surprised to see it reach such a rarefied number: out of the seven separate volumes of Aquaman published since 1962 this is already the third-longest. He is not the most sustainable of characters. Enough readers like him to ensure he is a constant presence in the DC Universe, but perhaps not quite enough like him enough to put down the US$2.99 a month to read about his adventures.

This extra-length issue really uses its spare pages to emphasise and accentuate a central fight between Aquaman and a new nightmarish mutant villain. Nicely illustrated splash pages give the fight a pleasing amount of weight and power, and demonstrate the physical strength of the new adversary. Dan Abnett's script introduces a level of comedy akin to Keith Giffen's work which mixes the tone up a little and helps stop the comic from feeling so portentous.

We are also seeing a transformation of Mera, Aquaman's long-term wife/partner - I am not sure if the New 52 has ever officially confirmed their marital status - into Aquawoman. She has her own Aquaman-style uniform, which Brett Booth sadly realises in the most egregiously sexual of terms. It's an annoying blemish on an otherwise wonderfully entertaining comic.

I hope Aquaman continues to please in this vein going forward. It staggered around somewhat following Geoff Johns' departure, and is in sore need of a new and consistent creative approach. After all, it is his 75th anniversary this year.

Under the cut: reviews of Darth Vader, Invader Zim and Revival.

There is very much a formula to Gillen's Darth Vader, but thankfully it is a formula that continues to work in enormously satisfying ways: Vader heads to a planet on the Empire's business, people attempt to double-cross him, he turns out to be smarter and more dangerous than his assailants. Meanwhile his darkly comedic droids say and do violently and inappropriately amusing things for a page or two. This current storyline, now into its third part, feels particularly pleasing because unlike earlier issues it is not too closely tied into backstory and broader Star Wars continuity. The fan pornography is enjoyable, but it's nice to take a great now and then. (4/5)

This is very much a comfort book: it does not do anything particularly ground-breaking or memorable, and it is probably not going to end up on many people's "year's best". On the other hand it is a generally accurate and effective duplication of a much-loved cult television cartoon, one written by a series writer and with layouts by one of the original artists. The bottom line: if you feel like the sort of person who would read an Invader Zim comic, this will satisfy your craving for further adventures. If you don't feel the urge, you're probably not the target market. (3/5)

As Revival commences its 10-issue mark to a conclusion, issue #38 spends a lot of its time focusing on Dana's young son Cooper. It is a cleverly construction issue, using child-like drawings to reflect Cooper's own perspective on the dead of Wisconsin returning to life. It also allows for a really well-played cliffhanger ending. To an extent I feel the book has slipped a little in recent months, becoming a bit unbalanced and unfocused compared to earlier issues, but this specific issue feels like a really promising return to form. (4/5)
Posted by Grant at 9:25 PM