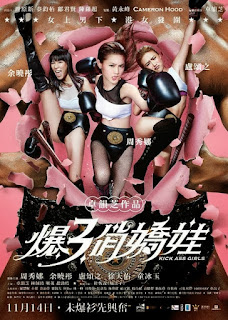 Boo (Chrissie Chau) runs a Hong Kong boxing club, Kick Ass Girls, that has fallen on hard times. To improve its chances - and to capitalise on a throng of sex-obsessed scrawny nerds - she hires the voluptuous Miu (Dada Lo) to be the club's new trainer. At the same time Boo is not speaking to former best friend TT (Hidy Yu) after TT stole her boyfriend. Then in Malaysia all three get kidnapped by a criminal organisation.

This is that rare case when a review steps well beyond a critical opinion, and instead becomes a warning: you do not want to see Kick Ass Girls.

There is a good chance you would not watch it anyway. This 2013 Hong Kong comedy - and I use the word in the broadest sense possible - sank without a trace upon release, and with very good reason. It is ultimately a bit of an insult to both taste and intelligence, garishly edited and astonishingly poor in terms of story and character. To an extent it wants to be a smutty, old-fashioned "Category III" exploitation flick; the kind that used to litter Hong Kong cinemas in the early 1990s. The problem is that it also wants to be a "girl power" action-comedy about some young women operating a boxing club, and that precludes its exploitation aspects from actually showing off any kind of sex or nudity. Now I am not a fan of Hong Kong's old Cat III films, but had Kick Ass Girls at least emulated them properly I could at least respect it for sticking to its guns.

Sadly the film also seems to want to be an action-thriller about women getting kidnapped by gun-toting triads and forced to compete in an underground fighting ring. Since the film wants to also be kind of sleazy they do that in fetish outfits, and since it also wants to be comedic the plight of human trafficking is played partially for laughs. And ultimately this is where the film totally collapses. If it was a bad film it would be easy to just dismiss it and move on. Kick Ass Girls does not even make up its mind which bad film it wants to be. There are bad films that are actually quite entertaining. This is absolutely not one of those films.

From here onwards it is actually a challenge to review Kick Ass Girls any further. It is difficult to judge the acting because it all feels so poorly directed by Vincci Cheuk that its impossible to determine if there's a place where bad direction and script ends and bad acting begins. I feel obliged to give the cast the benefit of the doubt until I see them in something else. I have read that Cheuk's follow-up, the 2014 comedy Temporary Family, is much better than this. Given Kick Ass Girls, that was a pretty safe bet anyway.

I have no idea what audience this film is for: it is too leery and male-gazey to appeal to anyone looking for a positive female-focused action film, and it is too restrained and coy to appeal to anyone looking for something leery and male-gazey. It has drunkenly slipped between two stools at the bar, and now sits on the floor: rightfully forgotten, passed over and utterly unnecessary. This is easily the worst thing I have sat through this year to date - and only a few weeks ago I watched Superman IV.
Posted by Grant at 7:25 AM