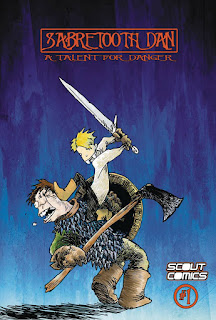 One of the genuine delights of visiting your local comic shop is finding unexpected independent comics on the shelf of which you have never heard, but which turn out to be absolutely delightful. That's certainly the case with Sabretooth Dan: A Talent for Danger, whose first issue was published this week by Scout Comics.

It's a three-issue miniseries about Sabretooth Dan, a human boy with two protruding tusks raised by wolves in a house and forced to do the cleaning. When he spies a pair of pirates in the local library - which is long abandoned - Dan decides to run away from home and live a live upon the high seas.

There is a beautiful sense of whimsy and delight about this comic, which is written and drawn by C.R. Mountain. It has wonderful cartoon-like designs, and its black and white artwork makes it immediately reminiscent of all the popular independent comic books of decades past. It has perfectly-pitched humour as well as a strong sense of adventure. It is a wonderful fantasy book that deserves a huge audience - but due to its independent nature may struggle to find it. Hunt it down. Check it out. If you like it, recommend it to your friends like I'm currently recommending it to you. (5/5)

Sabretooth Dan: A Talent for Danger. Story and art by C.R. Mountain.

Under the cut: reviews of Daredevil, The Omega Men and Saga.

Slap new Bill Sienkiewicz art of Daredevil and Elektra onto the cover of Daredevil #6 and you are likely to grab a lot of readers' attention. Assassin and former lover Elektra is back in Matt Murdock's life, and in a pretty violent fashion too. This issues launches a new storyline and it already feels more interesting than the last. Matteo Buffagni's artwork is great too, with some great colours by Matt Milla. I remain a little confused over how the world has somehow forgotten Murdock is Daredevil. He keeps referencing how something happened but not what it was, so I'm unsure whether it's something that happened as a result of Secret Wars or whether it's a mystery to be resolved in a future issue of Daredevil. (3/5)

System-wide war breaks out as the Omega Men - now essentially led by Kyle Rayner - lead the charge against the Citadel across several alien worlds. This is a fantastic penultimate chapter, which has an epic scale and which builds to the brink of a tremendous climax. Bagenda's art is, once again, outstanding. When this series ends I hope he develops something really exceptional - he deserves a bigger audience than he's getting here. The Omega Men has been a fantastic and remarkably distinctive book for DC: full props to the publisher for keeping it in print for the full 12 issues, but it's a tragedy this book never found its audience. (5/5)

The sixth arc of science fiction series Saga wraps up here, in a climax that once again re-arranges the pieces on the chessboard and sets events up for a seventh arc in a few months. I swear there's a contradiction between what happens here and what narration in earlier arcs told us, but I'm happy to wait and see if the inconsistency will be explained. Despite that the plot rattles along with a bunch of surprises and character moments. It's not a perfect climax - one plot line feels rather anti-climactic compared to the other - but it's still amazing stuff. (4/5)
Posted by Grant at 8:52 PM