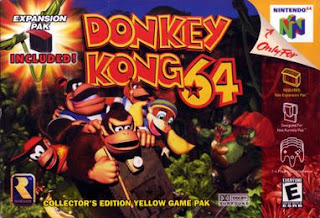 Rare had scored some big hits on the SNES with Donkey Kong Country and its sequels: they were essentially Super Mario World clones, but boasted visually arresting graphics thanks to a careful conversion of 3D rendered characters into two-dimensional sprites. It was a big deal at the time, with Nintendo handing over responsibility for reviving their first big videogame character over to a British developer. Given Rare's success with the character, it was not a surprise to see Nintendo and Rare repeat the exercise on the Nintendo 64.

It was also not surprising to find Donkey Kong 64 was essentially a Super Mario 64 clone with improved graphics and some more complicated gameplay. Rather than control one character, as Super Mario 64 had done, Donkey Kong 64 allowed the player to swap between five different members of the Kong family - each with their own specific ability. The game was split up into eight different worlds that could be explored in a relatively open, non-linear fashion.

It is clear that Rare learned a lot from their earlier 3D platformer Banjo Kazooie, since Donkey Kong 64 managed to improve on a lot of that game's faults. The visual design was better, the game worlds felt more interesting, and the camera issues felt somewhat alleviated. There was even a special multi-player made, allowing up to four people to play against one another in a series of special arenas.

Donkey Kong 64 required the use of a special "Expansion Pak" that boosted the Nintendo 64's memory and allowed for more sophisticated graphics. A bug in the game's code meant that it was unplayable without the pak, leaving Nintendo with no choice but to package the additional hardware with the game and increase its retail price. Ultimately only three games were released by Nintendo that required the pak, the others being Rare's Perfect Dark and Nintendo's own The Legend of Zelda: Majora's Mask.

The only main criticism of Donkey Kong 64 is that it was ultimately a somewhat derivative title: excellently produced, but not really any sort of major step forward in game design. It still falls well behind Super Mario 64 in terms of design and playability, but as a next step for players who had completed that title it was a genuinely solid substitute.
Posted by Grant at 5:30 PM