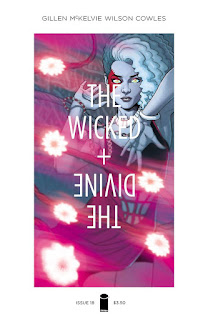 Kieron Gillen and Jamie McKelvie's contemporary fantasy series The Wicked + the Divine shot out of the gate for its first story arc, meandered just a little in its second, and then - rather deliberately I must say - became rather inaccessible and difficult in its third. Now it's back for volume 4, the 18th issue overall, and things have rocketed into high gear again. In fact it seems as deliberately commercial and filled with action scenes as the immediately previous issues were filled with confusing backstory and odd segues.

It is the sort of issue you really don't want to find out about before you read it, although it's fair to say it focuses on a surprise twist that is maybe not so surprising as both expected and immensely satisfying. It successfully kick-starts the book again and sets it off at high velocity towards a conclusion. The writing is great, the art is slick and wonderful, and Matthew Wilson's colours are positively vibrant.

For anybody who has not yet encountered The Wicked + the Divine (or WicDiv, to its fans): every ninety years the world is hit by an event known as the Recurrence, in which 12 young people are revealed to be reincarnations of ancient gods. Once revealed they have two years to affect the world and inspire humanity before dying. This latest time has fallen somewhat off the rails, with the gods getting murdered one by one and their various alliances falling apart. It's a great, smart, pop music-soaked dark fantasy, and well worth checking out. (5/5)

Under the cut: reviews of Black Widow, Detective Comics and Spider-Man.

Issue #1 of Waid and Samnee's new volume of Black Widow presented an extended action set piece which provided a lot of thrills and surprises, but no backstory or context whatsoever. Issue #2 provides that backstory and context. It's very well written and characterised, and has some great art and layout, but at the same time it feels very slightly unsatisfying. When collected into a trade paperback these two issues will probably work fine, but separated into individual comics they feel a little frustrating to sit through all action followed by all set-up. A blend of the two would have been more satisfying I think. Still, it's great stuff despite those flaws. (3/5)

With the return of Bruce Wayne as the Batman in Batman #50 I had assumed that was the end for Jim Gordon's brief, brilliant tenure in the role. Instead the murder of a former fellow marine sends Gordon back to Afghanistan to investigate - and he brings his Bat-suit with him. I love the idea of Jim Gordon's Batman sticking around for a few more issues, and this intelligent, quite striking new storyline from Peter Tomasi is very welcome. Fernando Pasarin and Matt Ryan's artwork is great, and Chris Sotomayor's colours have a nicely subtle feeling to them. This is a great opening chapter. I really hope the rest of the story arc is this strong. (5/5)

This third issue of the new Miles Morales Spider-Man book represents pretty much everything - both good and bad - that I've come to expect from Brian Michael Bendis. The book is beautifully characterised, with believable people having well scripted conversations. The insight into the key characters is masterful. The dialogue sparkles. The pace is slow and leaden, and by the time you reach the end of the issue and realised you've just read through Miles getting in trouble with his grandmother, Miles having a brief conversation with Ms Marvel, and some backstory getting set up for a future issue, it's all a bit unsatisfying. It's good, but with a denser panel layout and a faster pace it could be so much better. (3/5)
Posted by Grant at 10:49 PM