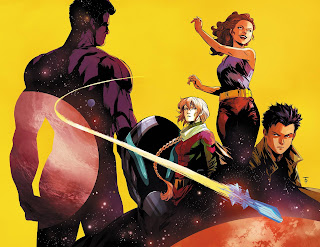 Boom Studios is on a winning streak of miniseries of late, and from its first issue it looks like Joyride is going to be yet another feather in the publisher's cap. This energetic series follows a trio of teenagers on a race across the galaxy, combining science fiction, drama and humour in a really effective fashion. Don't be surprised to read news that it has been picked up by a Hollywood studio: this is high concept, well-illustrated entertainment.

Joyride follows Uma and Dewydd, two teenagers living in a repressive future Earth that has been encased within an enormous shell to block it off from the rest of the universe. Uma has a plan to escape, and hitch-hike a ride with a friendly alien, and Dewydd is basically devoted enough to follow her with her plan. Their escape attempt is interrupted by Catrin, a much more dutiful and obedient teen. The adventure begins there.

The issue has a fast pace and great, immediately likeable characters. Jackson Lanzing and Collin Kelly have written a script with a sort future dialect and slang that's familiar enough to be immediately readable but abstract enough to strongly evoke a dystopian future. Marcus To's artwork is beautiful and nicely detailed; Irma Kniivila's colours really make it pop off the page. This is a fabulous first issue. (5/5)

Under the cut: reviews of Action Comics, Doctor Who and Obi-Wan and Anakin.

Superman is terminally sick, and is undertaking a melancholic tour of his extended community of supporting characters to say goodbye. He has already farewelled Lana Lang, Lois Lane and Batman, and this issue it's all about tracking down and speaking with Supergirl. It's an okay issue but as the third in a row to follow the same narrative it suffers a bit from diminishing returns. Some strange side-plot about a Chinese scientist stealing Superman's DNA offers a bit of intrigue, but after three issues I want to see something with a bit more meat to it. (2/5)

This second issue feels much stronger than the first, with a more engaging story, much better dialogue and an energy that the first part sorely needed. Praise is particularly due to writers Gordon Rennie and Emma Beeby, who do an excellent job of capturing Tom Baker's jovial, glib persona as the Doctor. This isn't a necessary series by any stretch, but for old-school Doctor Who fans craving another adventure for the Doctor and Sarah-Jane it hits the spot pretty effectively. (3/5)

On Carnelion IV Anakin and Obi-Wan have been separated by two rival tribes. In flashbacks Anakin falls further under the wing of Chancellor Palpatine. This miniseries has been getting stronger as its gone, combining a fairly generic but broadly entertaining A-plot with some nice backstory showing more of the gradual influence Palpatine exerted over Anakin between the first two episodes of the movie prequels. Marco Checchetto's artwork is stunning, and definitely the highlight of the book. (3/5)
Posted by Grant at 8:26 PM