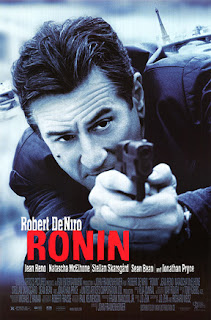 A group of strangers are assembled in Paris for a criminal job: to steal a briefcase before it can be sold to a third party. The team do not know the contents of the briefcase, the identity of its buyer or seller, or even their own employer. When the team is double-crossed by one of their own, all bets are off as American ex-agent Sam (Robert De Niro) and mysterious Frenchman Vincent (Jean Reno) team up to recover the case.

Ronin is a stunning 1998 action-thriller by noted American director John Frankenheimer. It is a superbly constructed film. It boasts an excellent cast, including not only De Niro and Reno but Jonathan Pryce, Natascha McElhone, Sean Bean, and Stellan Skarsgård. It has a twisting and intelligent storyline and whip-smart dialogue, thanks in part to an pseudonymous rewrite by David Mamet. Perhaps most memorably of all it features some of the most effective car chases ever presented on film.

Some action films come and go, or become dated, or slip out of popularity due to changing tastes. Ronin simply gets better and better each time I watch it.

It has a particularly intriguing opening act, as a group of men assemble to undertake a heist at the behest of their Irish handler Deirdre (McElhone). There are few films that give the audience so little information upon which to base the story. Characters are only ever introduced by their first names - and it's a good chance they're all fake. The circumstances of each man being recruited is only ever referenced in oblique terms. There is a McGuffin - a mysterious briefcase to be stolen from a group of organised and well-armed criminals - but the audience is not told what the briefcase contains, who is selling it, or why Deirdre's anonymous employer wants it so badly.

The surprises keep on coming. On member of the team, highlighted early-on as a brash and violent hot-shot, turns out to not be the operative his new employer was led to believe. The remaining characters reveal their personalities and skills gradually through action. It's a careful process of drip-feeding information, and it makes Ronin a gripping film to watch. It does not need to over-feed the audience with backstory or context because it wisely trusts the audience to fill in the gaps or simply come along for the ride. It all makes it a rather pure sort of a movie, since pretty much anything extraneous to the core narrative has simply been stripped off and discarded.

As the story develops, and the body count rises, the film makes a very graceful transition from ensemble thriller to an action-oriented two-hander. De Niro and Reno share a brilliant chemistry, and their scenes together are among the strongest in the whole movie. There is a particularly strong sequence in which Sam is shot, and Vincent takes him to the safety of an old contact named Jean-Pierre (Michael Lonsdale). During Sam's recovery, he shares a great conversation with Jean-Pierre about his hobby - a model diorama of Japan's 47 ronin. It is a beautifully written scene that makes some marvellous allusions to Sam's past, the profession of secret agents, and the general themes of the film.

John Frankenheimer made his reputation in the 1960s with great films like The Manchurian Candidate, Seven Days in May and Seconds. He brings a lot of that 1960s style to Ronin, and that goes a long way to making the film as timeless and as enjoyable as it is, nearly 20 years on. Some times you watch a film and it becomes an instant favourite. Other films take a few goes, as their tremendous merits become steadily apparent with successive viewings. Ronin is the second kind of film: better and more engaging every time I see it.
Posted by Grant at 9:22 PM