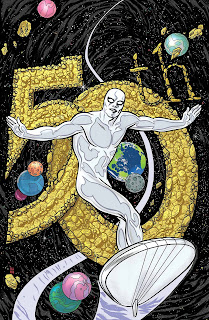 This month Marvel Comics celebrates the 50th anniversary of the Silver Surfer: not with some big crossover or variant cover acknowledgement, but by slapping "50th" on the cover of the standard-length Silver Surfer #3. It feels like a bit of a weak celebration, all things considered, as if the anniversary crept up so quickly that no one at Marvel noticed until it was too late. Either that or the bitterness at a corporate level that 20th Century Fox retains the movie rights to the character led to an instruction to keep any commemoration at the barest minimum. The reason does not particularly matter, but for fans of the character - myself included - it seems a little weak.

Dan Slott and Michael Allred do their best to give the character a momentous climax within the confines of a standard 20-page issue, but it is an uphill battle. Norrin Radd is forced to choose between the return of his own planet and the survival of Earth, which is a nice sort of anniversary-style story, and there is a cameo by the Avengers, but altogether it is business as usual. It's enjoyable, but not exceptional. (3/5)

Under the cut: reviews of Darth Vader, Superman and Batman/Superman.

The war on Sho-Torun comes to a close in this well-paced and smart climax that wraps up events neatly while throwing in a few hanging threads to lead into issue #20. It's a satisfying package of everything I've come to expect from this comic: good dialogue, a strong Star Wars feel, great artwork, and Darth Vader being an unstoppable and seemingly-infallible force for the Empire. This book has been running for about 18 months and it's a good indication of the strength of Lucas' original character that watching Vader hunt down enemies of the Empire still has not lost its enormously fun appeal. (4/5)

I usually avoid reading multi-comic crossovers, and this attitude has made Action Comics a bit frustrating over the past year - thanks to Greg Pak's writing it's not been insurmountable, however. With Peter J. Tomasi handling this latest Superman story arc, and with me really enjoying his work, I figured I'd go all-in on buying every instalment and seeing how it goes. Following a string of severely dangerous adventures, Superman is dying: he's so riddled with kryptonite radiation that his body simply cannot heal it. As a result he has set about resolving his personal affairs, and working to ensure that the Earth will continue to be defended in his absence. In Tomasi's typical style it's very well characterised and paced, and Mikel Janin's artwork is beautiful. There's a lovely melancholy tone running right through this issue. It also seems to be setting up two new Supermen to potentially take Clark's place. It's a great opening issue. (4/5) Note: this issue was released last Wednesday, but I only managed to get a copy this week.

In the second part of "The Final Days of Superman", Clark goes to visit Batman with two objectives: to say goodbye, and to get his assistance in tracking down the vanished Supergirl. It continues in much the same vein as Superman #51. Whereas that issue gave Clark a moment of farewell with Lana Lang and Lois Lane, so this second part gives Clark and Bruce one 'final' hurrah together (of course nothing is final in superhero comics). Further strange happenings occur as well, suggesting a bigger story about to begin any issue now. Mahnke and Mendoza's artwork is really strong - if this is goodbye for the New 52 Superman, they're sending him off with a great set of artists. (4/5)
Posted by Grant at 10:13 AM