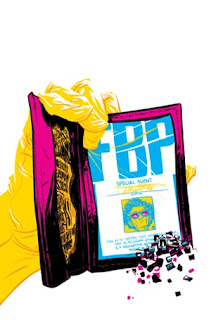 Last month I reviewed the first issue of a new DC Vertigo comic titled Collider. I was a bit ambivalent about it, but suggested people give it a shot as it had a lot of potential. I shall discuss whether or not the second issues lives up that potential in a moment; first we need to talk about the title.

It completely flummoxes me that, as a subsidiary of mega-corporation Time Warner, nobody at DC Comics thought to do a rigorous trademark search on the title Collider before they launched their new comic. I'm interested to see how this affects sales for this second issue, since people looking for Collider on the shelf aren't going to find it there. DC has been forced to rename their new comic so as not to confuse it with a pre-existing comic of the same name. So now we're looking at issue #2 of FBP: Federal Bureau of Physics, which is definitely a less catchy name.

The issue itself is very well composed and structured, and opens up a lot of mysteries for future issues to explore. The art continues to be highly distinctive with abstract renditions of the lead characters and a great, vivid use of colour. The science fiction ideas in this book are well thought-out and entertaining, and it looks like they'll play background to a long-running storyline based around the characters. All up a big improvement on issue #1 and more than enough justification to go buy issue #3 in September. It's just a pity about the title. (4/5)

I am really enjoying this current arc, in which a time-travelling Jonah Hex has found himself lost in 21st century Gotham City and is on the run from the police with an entirely new generation of Arkham with him. This issue benefits from a lack of backup: it's all Hex for the whole extended-length book. It's also very well thought-out, and comes with a great cliffhanger ending that's both a surprise and entirely logical. I think this might be my favourite issue of this comic so far. (5/5)

This is one of those comics where I enjoyed it while reading it, but can't really think of anything specific to recommend it now that I'm done. One big annoyance is the last page: I get the desire for shock twists, but the one Johns has selected for this arc seems to cut his own story off at the knees. Still, great artwork and an absolutely gorgeous splash page by Paul Pelettier and Sean Parsons. (3/5)

If nothing else, this collection of short comic adventures proves that there's a lot of potential for a Batman Incorporated title in the future - one that focuses less on Bruce Wayne and more on the international Batman analogues that he set into motion and funded. I for one would gladly read a Batman of Japan book by Chris Burnham, or a monthly Melbourne-set Dark Ranger comic. Batcow, maybe not so much. The book itself is uneven, and at US$4.99 rather expensive, but I had fun reading it. (3/5)

While the dialogue is strong and the artwork visually stunning, there's something rather hollow about Batman/Superman. The action is all taking place out in the middle of nowhere, often with little or no background artwork and few supporting characters. There's a lovely flashback to the childhood of the Clark Kent of Earth 2, but all up it feels quite slight for something that comparatively quite an expensive comic book. (3/5)

Doctor Who: Prisoners of Time #8

This miniseries is operating on such a tedious formula that it's honestly become a chore to read at times. This issue features Paul McGann's eighth Doctor embarking on a reunion trip with one-off TV movie companion Grace Holloway. They have a highly stereotypical adventure, at the end of which Grace is kidnapped like all of the other companions in every single issue. Roger Langridge gives the issue an odd cartoony look that doesn't quite fit with the script. I like his stuff, I'm just not sure I like him illustrating Doctor Who. There's four more issues of this: I'm anticipating three more months of exactly the same scenario played out with slightly different artwork, followed by an unsatisfactory one-shot to wind it up in 20 pages. IDW has lost the Doctor Who license; reading this comic is making sure I don't feel too sad about it. (1/5)

The Reverse Flash is finally revealed - just in time for the special Reverse Flash #1 in September. I didn't see it coming, and it's a nice twist. This continues to be a robust, entertaining title. There's something about the Flash as a character that seems to make creative teams bring their A-game. I've never quite been able to put a finger on what it is, but no matter who writes the book - Geoff Johns, Mark Waid, Grant Morrison, etc - it always seems to be immensely enjoyable to read. The current team of Manapul and Buccellato is no different. (4/5)

This comic continues to be a wonderful joy ride of super-rich kids, crazy powers and odd gadgets told with wit and pace and drawn with clarity, humour and style. My one big question is: what the hell happened to this issue to require six pencillers and inkers to produce 20 pages of story? I have to admit I didn't notice until I finished reading the issue, which is a testament to the talent involved, but still: what the hell went on here? (3/5)

Immonen and Schiti were given a very difficult task in following up on Kieron Gillen's amazing run on Journey into Mystery. His run was exceptionally well received, and starred Loki - currently one of the most popular characters of the Marvel Universe thanks to the Thor and Avengers movies. They based their run on Sif, who - while an exceptional character - had nothing close to the profile. In the meantime their book was relaunched without a change in numbering at a time when most of the books around them were getting relaunched with new issue ones. All those factors in mind and I'm sadly not surprised this version of Journey into Mystery failed to find an audience. It's a shame, because this issue - like previous ones - is brilliantly written and with great art. Valerio Schiti has a real gift for drawing facial expressions, and managed to make Sif look powerful and competent without drawing her like a Playboy model. I'm going to miss this book. (BTW its cancellation means that the highest-numbered monthly book on Marvel's shelves is, of all things, Venom - and that's getting cancelled in October.) (4/5)

I was extremely harsh with Marvel's Age of Ultron for taking 10 issues to tell me that I needed to purchase another miniseries. Correspondingly, DC's Trinity War has taken 6 issues to do precisely the same thing. It's been a long, drawn-out runaround with no purpose other than the introduce the Crime Syndicate of America to the New 52 and lead in next month's Forever Evil event. Nope, not buying it. Officially over it. Nice art, but not worth US$3.99 and no ending. Actually, let's dwell a little longer and really think about it: DC has been harping on about this event for two years now, and instead of a Crisis-level earth-shattering event series, it's basically a US$23.94 advertisement for another miniseries. That's exceedingly crappy behaviour or gross incompetence. Or both. I'm going with both. (1/5)

This is such a slickly scripted and realistically drawn comic book. It's mature, intelligent and rich with character. This issue fleshes out the near-future world a little more, and gives a bit more insight into how the ruling families work. It also lets Forever spend some time with her opposite number in a rival family, which is a lovely scene. My only big criticism of this book is that it honestly feels more like a television series; indeed, I'd be surprised if it isn't optioned soon by a production company. (4/5)

The deadly game of cat and mouse in the flooded streets of New York reaches a climax, and it's one that I totally wasn't expecting. In many respects it feels a little too abrupt: since the book launched Brian Wood has been writing three-issue story arcs, and for the first time I really feel this one could have done with being a bit longer. I'm interested to see where it goes from here. Garry Brown's atmospheric artwork suits this comic to a tee. (3/5)

This one shot by the creative team behind Star Wars Legacy is a neat little Twilight Zone riff about a scientific experiment gone awry in San Francisco Bay. It was originally published in three parts inside Dark Horse Presents, but here you get the whole story in one comic for just US$2.99. That's pretty good value for a self-contained sci-fi/horror story. I liked this a lot, and to be honest I'm interested in buying more short, self-contained one-shots like this. (4/5)

This issue wraps up some hanging threads from the first story arc while setting the book off on what I assume is it's primary direction: a Sith warrior is sneaking around the galaxy killing off other Sith and threatening to return to the catastrophic "rule of two" that gave the galaxy Palpatine and Vader. Brian Thies is a reasonable replacement for Gabriel Hardman on artist duties - not quite as effective, but he may grow on me. (3/5)

Jason Aaron follows up the massive "Godkiller" arc with this perfectly observed epilogue issue, in which three different Thors return to their own time and place, with varying impacts. Understandably the bulk of the issue is devoted to 'our' Thor, as he returns to present-day America in a series of genuinely emotive vignettes. It's hard to pick a favourite. I'm not sure if Thor has been this good in decades - Jason Aaron's been writing it for 12 issues now and he's already proven himself worthy of being named with the greats. (5/5)

The "One Year Later" story arc heats up as Spider-Man and Spider-Woman start fighting against the Roxxon Corporation, while Cloak and Dagger continue to run from the authorities. This is pretty much an average issue of Ultimate Spidey, which essentially means great dialogue, strong characterisation, great artwork and a slightly annoying slow pace. Mind you, I think there's a whole edge to this comic I'm missing, since the Ultimate books re-imagine a whole pile of Marvel characters into new versions. Sadly I don't read enough Marvel to know a lot of these supporting characters in the first place.  (4/5)

This is like reading a Marvel super-team book crossed with a great British youth TV drama: Queer as Folk, This Life, Skins, take your pick. It's got a great cast and brilliantly funny dialogue, plus no one in comics today draws facial expressions as well as McKelvie. He's some kind of impossible genius in that regard, making every comic he draws a must-read. (4/5)

Winner of the Week: Thor: God of Thunder. It's such a great comic.
Loser of the Week: Justice League. I promised myself after Age of Ultron to not get sucked into another superhero event, and did I listen to myself? DID I LISTEN?
Posted by Grant at 10:14 PM