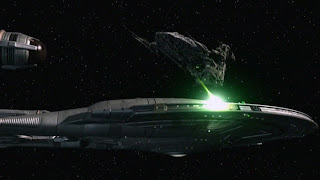 I remember that when Enterprise was originally announced by Paramount Pictures I was overcome with a sense of eye-rolling cynicism. I remember having a conversation with a friend - I can't remember who - where we smugly anticipated that despite being a prequel set in the century before James T. Kirk we would see the Borg inexplicably crop up before the first year was out. And I'm happy now to confirm that we were wrong. The Borg didn't turn up in Season 1. They turned up in Season 2.

"Regeneration" is a sequel to Star Trek: First Contact that's incorporated into the prequel to Star Trek to in itself act as a prequel to Star Trek: The Next Generation's epic two-parter "The Best of Both Worlds". No, no: bear with me, it's honestly not as confusing as it sounds. So in the 24th century the United Federation of Planets is attacked by a cybernetic civilization called the Borg who, while defeated, launch a second attack some years later that results in them travelling back in time to the 21st century where they are defeated by the time-travelling crew of the USS Enterprise, but some of the Borg from that attack are frozen in the Arctic when their section of the Borg ship explodes, and a century later they are defrosted by Starfleet scientists and subsequently take over their spaceship and attempt to flee back to their homeworld, except the Enterprise (a different Enterprise with a different crew) destroys their ship but not before they send a long-distance subspace message advising of Earth's existence that takes 200 years to arrive and leads the Borg Collective of the 24th century to attack the United Federation of Planets.

That strange whining noise you heard in your head for the majority of that paragraph is pretty much what I heard for most of "Regeneration". Look, it's not a bad episode. It's very well directed and captures a great sense of menace that the Borg lacked pretty much since "The Best of Both Worlds". The musical score in particular is very strong. The actors are good, particularly Scott Bakula and John Billingsley, and I can't fault the logic of the time travelling paradox that the writers create. That said, there's still that tedious dull whine; that sense that, no matter how decent the production or how well-intentioned, it's still a grossly inappropriate shoe-horning of 1990s Star Trek into 2000s Star Trek. If you want to do a prequel, then fine, but if you do make a prequel then you don't get to play with all of the toys. In Season 1 they squeezed in the Ferengi with enormous leaps of story logic. Now they're doing it again with the Borg. I assume Q will be showing up any week now.

In the end I honestly don't know what to give this episode in terms of my approval or disapproval. Conceptually I hold it in absolute contempt. As a viewing experience I can't deny it was pretty enjoyable stuff. It requires more than a leap of faith to jump some of the more unlikely story hoops (Dr Phlox's storyline is hand-waved into resolution at the end, for example). Let's give it the thumbs-up, if for no other reason than there is a certain entertainment value in watching a TV franchise crawl up into itself, ouroboros-style, until there's almost nothing left for a newcomer to engage with.

That's 15 good episodes out of 23, with three more to go this season. The season score sits at 65%, which is actually one percentage point higher than Season 1 got in the end.
Posted by Grant at 9:05 AM