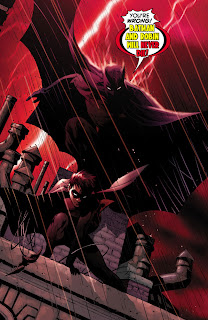 Last week Grant Morrison concluded his 82 issue Batman epic, one that began all the way back in September 2006 and ran through Batman, Batman and Robin, Final Crisis, The Return of Bruce Wayne and two volumes of Batman Incorporated. That's a pretty big deal, and one that people don't seem to be paying much attention to. As a point of comparison: Morrison's run on Doom Patrol lasted for 44 issues, his run on JLA lasted for 33 and New X-Men 41. Even his widely acclaimed magnus opus The Invisibles (still my favourite comic book of all time) ran for 59.

Grant Morrison may have left the building, but Batman and Robin will never die.

Under the cut: reviews of Batman Annual, Batman Incorporated, Bedlam, Collider, Daredevil, Detective Comics Annual, Doctor Who: Prisoners of Time, The Flash Annual, It Girl and the Atomics, X-Men and X-Men Legacy.

I got rather annoyed with DC's annuals last year, because more often than not they were simply slightly more expensive instalments of ongoing storylines. Thankfully this isn't the case in 2013: this is a great self-contained book about Arkham Asylum's oldest inmate with a nice tie-in to "Zero Year". It's by no means the best Batman comic DC has published in the last month, but if you're looking for a solid one-shot this one may satisfy. The backup strips nicely flesh out the characters from the main story. (3/5)

Morrison's Batman opus comes to a close in a manner that some will find brilliant, many others I suspect will find underwhelming, and it wouldn't be a Morrison book without at least a few just scratching their heads in confusion. For me it was very much a mixed bag. The deus-ex-machina ending frustrated me enormously, but on the other hand the character work was superb and the deliberately hanging plot threads are all sitting there in a tantalising fashion, just waiting for future Batman writers to pick up and play with them. It's not the greatest final issue, but it does have a nice sense of closure to the story. (4/5)

Bedlam just got really creepy in the most unexpected of ways. This has the best cliffhanger of the week, hands-down, made all the more unsettling by Spencer cleverly refusing to use any kind of sound effect, caption or dialogue to express it. In this issue Fillmore continues to assist police investigations after what appears to be a domestic terrorist attack. Two issues in and I'm beginning to like his art style a lot more. It's much sketchier than Riley Rossmo's, but it's actually suiting the storyline a little better. (4/5)

Just months after I had pretty much written DC's Vertigo imprint off for good, a veritable truckload of new material is coming out. I review the third issue of The Wake below, and Jeff Lemiere's Trillium is out this week, but for now let's take a look at Collider, a new ongoing monthly by Simon Oliver and Robbi Rodriguez. The first thing to note is the eye-popping colour; certainly this is the most attention-grabbing book of the month. In terms of story I'm not 100% onboard yet. The book basically follows a Federal department of physics, whose operatives travel the USA repairing damage to the space-time continuum as it occurs. It's full of top-notch science fiction concepts, and the book's attractively priced at only $2.99, but I'm just not fully feeling it on an emotional level. This is one to maybe try out and keep an eye on, because it may just be opening chapter jitters. (3/5)

This issue barrels along at a tremendous pace, as Daredevil is trapped inside a courthourse where half of the people there - including judges, police officers and clerks - appear to be secret agents of the villainous Serpent organization. It is tremendously entertaining stuff, setting out what looks to be a strong new direction for Waid's second major story arc. Few superhero titles are as consistently good at this, and I keep praising this book every month. If you're reading these reviews and aren't reading Daredevil, what on Earth do you think you are doing? (5/5)

Another relatively self-contained story for this annual, albeit one with some pretty obvious links to John Layman's current Wraith arc on Detective proper. This annual focuses quite closely on Lieutenant Harvey Bullock while introducing the villain Jane Doe to the New 52 for what I think is the first time. This one particularly benefits from its backup strips that flesh out the main story and add an enormous amount of depth and character. It's a great, deeply creepy read. (4/5)

Doctor Who: Prisoners of Time #7

I was really looking forward to this issue, partly because issue #6 was such a delight and partly because this issue features the Seventh Doctor, as played by Sylvester McCoy. McCoy's Doctor is still my sentimental favourite out of the 11 TV incarnations, so I was hoping for a story that matched his era and character. It's clear that the Tiptons did their best in trying to write such a story, and the artwork is wonderful, but this winds up being a colossal misfire, giving the Doctor dialogue that wouldn't feel out of place if Yoda was saying it, and turning its villain into a ridiculous and tedious caricature. The framing narrative - the Doctor has a short adventure, and at the end someone mysteriously kidnaps his companion - is getting very tiresome as well. On the plus side, you can buy this issue with a Dave Sim cover again. (2/5)

This is a great one-shot story teaming the Flash and Green Lantern together in a delightfully 'old school' sort of fashion. It's funny, fast-paced, action-packed and beautifully illustrated by Sami Basri. A sudden teleportation to an alien arena leads Barry and Hal back to their first-ever meeting, and a mystery regarding dozens of kidnapped children across America. Nicole Dubuc and Cully Hamner provides a nice backup strip at the end of this that, like the two Batman annuals this week, help to flesh out the main story. I really like it when DC remembers that superhero stories can be bright and fun; all too often they get bogged down in the grim'n'gritty. (5/5)

It Girl and the Atomics #12

This is the final issue for It Girl and her super-powered pals. I'm sure the Madman franchise will continue rolling on in the future, but for now this is it. It started off as such a strong, breezy series, and then stumbled in a series of what felt like placeholder one-shots. This final issue is, thankfully, much better than recent issues. It ties up the series as a whole, features the entire extended cast and with three artists works very much as a fun artists' jam piece. I'd be happy to see this series come back in a new volume, but it needs more of the fun of the earlier issues and less of the by-the-numbers stuff that crept into the back end. (4/5)

While this is a great issue, it falls short of the brilliance of the first two. I'm after something more ambitious than what I was given this month, which amounts to little more than an exceptionally good sci-fi horror movie pitch. Hopefully future issues will return to the unexplained future events and finally tie them into the present-day adventure. Don't get me wrong: this comic is very, very good, but I expect just that little bit more from creators like Snyder and Murphy. (4/5)

I wasn't sure about this new volume of X-Men when it started, but I'm happy I stuck with it because this issue was fantastic. Wood makes great use of his characters, and it's the interplay between them that I think is going to make this book work really well in the long-term. I also like that the opening storyline was only three issues long - we could do with more short, punchy storylines in superhero comics. Olivier Coipel's artwork is also very good, particularly in terms of character design: who doesn't think Storm looks better with a mohawk? (4/5)

While I've really been enjoying X-Men Legacy the last two issues have felt deeply underwhelming. It's been a very sudden jump over to the UK last issue, and a sudden conclusion to the storyline this issue. It all just feels a bit disappointing. I do continue to like Tan Eng Huat's wonderfully expressive artwork, but these past two issues Simon Spurrier's writing simply hasn't grabbed me. Here's hoping things pick up next issue as David Haller comes face to face with his mother. (2/5)