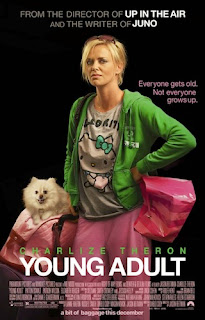 Mavis Gray (Charlize Theron) is a 37 year-old divorced alcoholic earning a living from ghost-writing pulp teen romance novels. When she is e-mailed a photograph of her high school sweetheart's newborn daughter, Mavis sets off to her own town in order to destroy his marriage, steal his heart and fix her broken life.

Young Adult is a starkly cynical movie from writer Diablo Cody (Juno) and director Jason Reitman (Up in the Air). It is not as good as either Juno or Up in the Air, but that doesn't stop it from being a hilariously mean-spirited, cold-hearted and oddly addictive little comedy.

It's difficult to pinpoint why I liked it. It stars an unlikeable protagonist doing unlikeable things to what seem like fairly decent people. I should hate Mavis - certainly her behaviour is often unforgivable - yet I walked away from the film entertained and liking her very much.

Charlize Theron gives a great performance as Mavis. She gives the character such a damaged, brittle quality that despite her behaviour you do want her to find a happy ending. I think it's possibly the best thing she's done in a career that's included quite a few exceptional roles. Patrick Wilson is engaging as Buddy, her ex-boyfriend, but he struggles with what is essentially a deliberately banal and normal character. Particularly good is comedian/actor Patton Oswalt as Matt Freehauf, the former school nerd who was crippled by an act of anti-gay violence (although he was never gay) and now lives a quiet, unambitious life in his sister's house. The odd yet utterly charming friendship between Mavis and Matt is what gives the film its emotional heart, buried as it is.

This is one of those films that a lot of people aren't going to like, or even engage with (the local video library from which I borrowed it had it classified as a drama). It doesn't have the sorts of Hollywood self-realisations or wish-fulfilments people might expect, nor does it feature any kind of shoe-horned moral lesson. It is what it is: mean, hard-edged, cynical and brutally amusing.
Posted by Grant at 7:56 PM