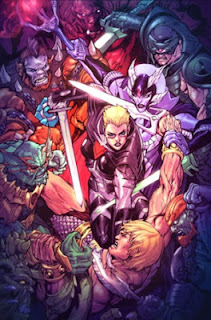 Another Marvel event kicks off this week: Infinity, by Jonathan Hickman. It could be really good. Hickman's a great writer, after all. It's also $4.99 for the first issue, which seems more than a little steep, and after Age of Ultron I swore I wouldn't be reading the next big Marvel event so I didn't buy into this one.

Also of note this week is the final issue of Demon Knights, after 24 monthly issues. Who would have guessed that a Middle Ages fantasy set inside the DC Universe would out-live Hawkman, Firestorm, or Deathstroke? Well done to creator Paul Cornell and follow-up writer Robert Venditti for guiding it through two entertaining years.

The various threads that Simone has been teasing out over the past two years finally begin to get woven together. So we've got (a) James Gordon and the GCPD hunting down Batgirl for the murder of James Gordon Jr, (b) murderous vigilante Knightfall shoring up her territory in Gotham, (c) Barbara trying to abandon her Batgirl identity and settle down with a new boyfriend, and (d) that boyfriend getting dragged into the line of fire of the GCPD. See how all those elements draw together so well? This is great, emotive stuff with a kicker of a cliffhanger. (4/5)

Prior to this run on Batman I had always uncharitably thought of Greg Capullo as 'that Spawn guy who works for McFarlane'. Now he's one of my favourite artists, giving Bruce Wayne and the dystopic world around him a powerful, slightly exaggerated physique. I talk all the time about Scott Snyder's great writing on this book (although, fabulous famous scene recreation aside, it's a little low-key this issue), so I figured this month I'd really emphasise just how much I adore Capullo's strong pencilwork and Danny Miki's exceptional inking. (4/5)

It was probably always going to be an uphill struggle for DC to maintain an in-continuity superhero book set in Dark Ages Europe, but everyone involved gave it their all and Demon Knights taps out at precisely two years. That's a pretty decent achievement, all things considered. This series doesn't end with a bang or a whimper, just a bit more of the same sort of action and banter that we've been getting all along. I'm sad to see it go - this was a really entertaining comic. Hopefully some of its characters will crop up again sooner rather than later. (3/5)

Sadly we've now hit the stage of the crossover where the entire cast run around in circles to buy the writer enough time to form a cliffhanger. It really is somewhat stupid to get a whole pile of superheroes running around together when two or three would probably do the trick. It overwhelms the storyline and ensures that nobody gets sufficient attention or development. I'm also increasingly unhappy with how DC have re-envisaged the Martian Manhunter. He used to be one of my favourite characters. Now he's disreputable, immoral and unnecessarily cruel. (2/5)

This is a really strong, enjoyable issue, with a few caveats. The main one is the way in which the series appears to have shoe-horned in a new Japanese-inspired version of the Creeper, and then taken every opportunity it can to foreshadow his appearance in the upcoming Justice League Dark 23.1 next month. The other is simply with the book's direction: it feels as if we're at the start of something quite big and long-running, yet a simple glance at the sales figures shows this isn't going to be the case. I'd rather a neat wrap-up to this series than a raft of hanging plot threads. (3/5)

It feels like an absolute age since an issue of Saga was published. In the meantime the second trade paperback collection has been released and Brian K. Vaughn has launched an entire television series (Under the Dome). This issue isn't an exceptional one in the context of Saga, but it's still heads and shoulders above most of what's getting published this week. The plot moves along a little more, we get reacquainted with the regular cast, and Fiona Staples gets to draw another 'oh really? You had to draw that?' panel. What's not to love? (4/5)

Brian Wood continues to write a fantastic Star Wars comic, dropping in all the little bits of character and plot development that we'd always assumed happened between Star Wars and The Empire Strikes Back but never actually got to see. Luke's Jedi powers continue to develop as he and Wedge infiltrate a Star Destroyer. Leia makes time to grieve for the destruction of Alderaan. Han and Chewie continue their flight from bounty hunters Boba Fett and Bossk. Ryan Kelly's artwork is great as well: dynamic, filled with energy and faithful to the screen characters without looking photoreferenced. If you're a Star Wars fan, particularly if - like me - you're mainly an 'original trilogy' lover, this is a must-read and a wonderful bit of nostalgia. (4/5)

The first full story arc of Thor: God of Thunder ends in a jaw-dropping and epic fashion. This has been an exceptional storyline, focusing less on Thor as a superhero and more on Thor as an actual god. It's been an epic time-travelling, universe-wide adventure with a brilliant villain, great new supporting characters and not one but three Thors. This is the sort of comic that, if properly collected into a nice hardcover collection, could do great and sustained business for Marvel for years to come. I absolutely adore it. (5/5)

True Lives of the Fabulous Killjoys #3

I am really enjoying the sci-fi world-building and expressive art in this comic, but I am getting a little concerned about the pace. By the end of issue #3 not a massive amount has happened, yet from memory we've only got two issues left. I'm interested to see how they manage to wrap this up in a satisfying fashion without feeling like the reader's time has been wasted. Worst case scenario, however: Cloonan's artwork is worth looking at no matter the story quality. (3/5)

Power Girl comes to the rescue as Huntress is captured by the villainous Desaad. This is, all in all, a great action-packed issue, but I'm left with some doubt about the ending. It doesn't come to a climax so much as stop, and while the copy on the final page promises a follow-up in two months it also promotes a Desaad one-shot in September as part of DC's line-wide villain's month. I'm feeling deja fu back to Katana (above); did I really just waste my time reading a comic book that's purely intended to advertise a different comic book? (3/5)

The first issue was a promising rebirth of a classic TV series. The second was a dangerously fan-oriented continuity lovefest. This third issue has crawled so far up itself that it's nigh-on unreadable. Everyone who was dead is alive again (yes, sadly that cover is a spoiler). Plots threads I'd hoped had been long buried are all coming back to life. IDW had me from the announcement that this coming was being released. It's taken them three months to lose me entirely. If the truth is still out there, it should probably stay there. (1/5)