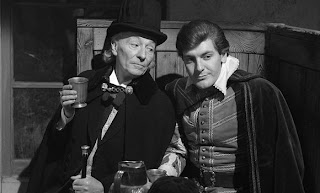 Who50 counts down to the 50th anniversary of Doctor Who by reviewing my favourite episodes and serials over the history of the programme, counting down from #50 to #1. Today, #10: "The Massacre of St Bartholemew's Eve", a four-part 1966 serial written by John Lucarotti and Donald Tosh and directed by Paddy Russell.

The historical adventure was a popular aspect of Doctor Who's early years, comprising roughly a third of William Hartnell's tenure as the Doctor. By the fourth season the production team elected to abandon the format and, asides from a two-episode dalliance with the format in 1982, the historical has never returned. It's a shame, because these historical stories are strong vehicles for character and drama. They can't hide behind rubber-suit monsters or alien planets. They rise or fall based on the plot and the characters within it.

"The Massacre of St Bartholemew's Eve" (or, to use its more common but apocryphal title, "The Massacre") is a stunning example on the sorts of drama Doctor Who can create in a historical setting. It's criminally obscure, even among Who fans, because the entire serial has been lost from the BBC archives. We can listen to it, however, via audio recordings - and those recordings reveal a shockingly mature and confrontational work. To my mind it's the most adult Doctor Who story of all time, and also one of its all-time best.

The plot, in a nutshell: the Doctor and his companion Steven, both shell shocked after an epic 12 episode encounter with the Daleks and the death of two of their travelling companions in the space of seven weeks (Katarina and Sara Kingdom), arrive in 1572 Paris. Tensions between Protestants and Catholics are close to boiling point. When the Doctor leaves Steven in a tavern and fails to come back, Steven is forced to go looking for him in a city set to explode into deadly religious violence.

This is a remarkably bleak serial by any standard. Given it was supposed to be produced for a family audience it's jaw-dropping. A four-part serial based on true events, each episode bringing the story one day closer to the titular massacre (and it doesn't shy away from the facts: 10,000 Huegenots were murdered in the streets), steeped in religious zeal and sectarian conflict. For the most part the Doctor is nowhere to be found - for a while Steven believes him to be impersonating the Abbot of Amboise (also played by Hartnell) for some reason, and when the Abbot is assassinated Steven is forced to consider the possibility that he may be trapped in 16th century Europe. At story's end the Doctor forces Steven into the TARDIS so they can escape before the murders begin. This is the point where Steven's resolve finally snaps: what's the point of travelling through history if you can't help anybody? It's a question raised time and time again in the series: in its first season with "The Aztecs", in the new series with "The Fires of Pompeii". For much of Doctor Who's first three years the Doctor is constantly focused on non-interference and escape. Within a year he's saving planets and interfering all over the place. In "The Massacre" Steven becomes the first companion to really deliver some harsh truths, and the Doctor irreversibly changes as a result. Hartnell's final monologue in episode 4 is the best single piece of acting he did in the role.

It's worth taking a paragraph to celebrate Steven Taylor (Peter Purves). Many of the episodes to feature him are missing from the archives, and the ones we do have aren't necessarily showcasing the series at its best ("The Gunfighters" and "The Ark", for example). He is a brilliant character, however: courageous, smart, bold enough to stand up to the Doctor and self-aware enough to recognise when he's wrong. In a perfect world there would be an episode written for 2014 in which Steven - now an old man - finally gets to meet the Doctor again, and tell him how much the Doctor made him the person he was - and to find out just how much the Doctor owes Steven in return.

It's a tragedy that we can't see "The Massacre" for ourselves, and have to rely on the audio recordings, because it's clearly a masterful work of 1960s television drama. I still hold out hope that a film recording might be found one day. In the meantime I enjoy this serial the only way that I can - and I enjoy it immensely.
Posted by Grant at 5:27 PM