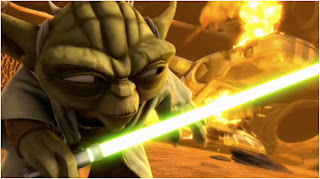 Star Wars: The Clone Wars recently wound up a five season run, yet despite being quite a big fan of Star Wars (okay, an enormous fan of Star Wars) I had never really bothered to watch the series. I know why: as a spin-off of the widely maligned prequel trilogy it didn't exactly boast the highest of pedigrees, it replaced an identically titled animated series by Genndy Tartovsky that I absolutely adored, and the animated feature film that Lucasfilm used to launch the series was fairly irritating. Yet, completist and tragic devotee that I am, I couldn't stay away forever, so - as with Enterprise and Star Trek, I figured it was worth giving the one bit of the franchise I'd never bothered with a chance to prove itself.

"Ambush" is the series premiere of The Clone Wars, and sees Jedi Master Yoda lead a small team of Clone Troopers in a fight against assassin Asajj Ventress and a Separatist droid army. It's set shortly after the film Star Wars Episode II: Attack of the Clones, as the Galactic Republic engages in all-out war with an alliance of separatist civilizations.

It's all rather twee, really. In the original trilogy Yoda was a highlight character thanks mainly to great puppetry by Frank Oz. In the prequels he's produced via CGI effects and speaks in the most irritating manner possible. Or, I should say, in the most irritating manner speaks he does. The Yoda of The Clone Wars is definitely the Yoda of the prequels, suddenly a lot more action-oriented and excessively wordy - so much so that I spent much of the episode wishing he'd either go away or just shut up for a few minutes.

Sadly the clone troopers don't fare much better. As Attack of the Clones made clear, they're all the same. Same appearance, same voice, same cadence, and as a result pretty much interchangeable. If the episode's production team wanted me to engage with them they were sorely mistaken.

The big surprise for me was the droid army. In The Phantom Menace the Trade Federation droids are incredibly tedious to watch, with their 'humorous' pratfalls and constant 'roger-roger' high-pitched dialogue. It turns out that in the context of an exaggerated children's cartoon they work really well. It made me feel wrong, somehow, like I'd committed a very delicate faux pas. There it is, though: the droids are actually pretty damned funny in this. Who knows, maybe future episodes will reveal the infamous Jar-Jar Binks to be a comedic masterstroke?

All up this is a pretty shaky opening to the series. Given that it ran for more than 100 episodes I'm assuming it gets better - I'll let you know.
Posted by Grant at 7:50 AM