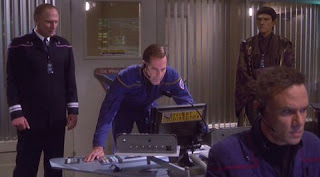 While the Enterprise explores a new kind of dark matter nebula, Captain Archer receives the news that his good friend A.G. Robinson (Keith Carradine) has died in a climbing accident. While surveying the nebula in a shuttle with T'Pol, Archer recounts the early days of the NX test program - in which he and Robinson fiercely competed for the chance to become captain of the Enterprise.

If you include the 90 minute pilot as two episodes, then "First Flight" is the 50th episode of Enterprise. I suppose in a sense it's appropriate then to celebrate the milestone with a special episode about the origins of the NX starship program. It fills in the gaps a bit, and shows a little of what it took for the Enterprise to get to where it launched all the way back in "Broken Bow". The problem is, however, that we kind of know what happened. There's nothing that "First Flight" shows us that we couldn't have assumed all by ourselves. This is the core problem with prequels, and of course "First Flight" is a prequel to another prequel. Surely that makes it doubly redundant.

Guest star Keith Carradine is an appealing enough performer, but overall it's difficult to really engage with this story. It's a relatively cliched storyline tied in to a fairly perfunctory present-day storyline about exploring a new kind of nebula. It's nice to see Scott Bakula and Jolene Blalock get some lengthy dialogue scenes to work on, but really it's just not that interesting.

This almost feels like a bookend for the season, as the episode it reminded me of the most was "Carbon Creek" all the way back at the start of Season 2. That story featured T'Pol recounting a story about her great-grandmother in the 20th century, and to be honest was about as redundant and pointless.