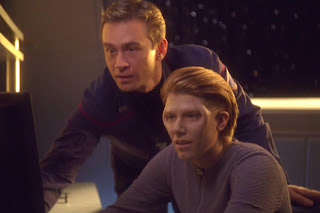 While studying a hypergiant star the Enterprise makes first contact with an alien species, the Vissians. While Archer accompanies the Vissian captain in analysing the star, the two crews spend time getting to know one another. Trip is particularly intrigued by the Vissians' reproductive system, in which the male and female require a third party - known as a cogenitor - to successfully reproduce. When he realises that a cogenitor is being deliberately held back by its male and female partners, he makes it his mission to give them an education.

"Cogenitor" is one of those rare episodes of television that lulls you into a false sense of security for 30 minutes before punching you hard in the gut by surprise. It's a difficult episode in many respect, raising a number of moral and ethical issues and then cutting to credits with the can still open and the worms squirming everywhere. Series producer Manny Coto cited this as one of the best episodes of Enterprise's first two seasons and having now seen it, it's hard for me to disagree.

At the episode's heart is a crisis between doing something because it is morally correct to your personal morals and not doing anything out of respect for other people's own morals and culture. The Vissians treat the cogenitors as objects - somewhere between a tool and a pet - despite there being little biological difference between them save for sex. Trip can't abide by this, and deliberately teaches the fast-learning cogenitor to read and think for herself (I'm going to say "herself" because the cogenitor is played by a female actor, Becky Wahlstrom).

When the Vissian couple with guardianship over the cogenitor learn what's going on all hell breaks loose. The cogenitor applies for asylum on the Enterprise and Archer refuses to give it - she's not in any danger and he's unwilling to interfere with the cultural traditions of another species. At the episode's end Archer informs Trip that the cogenitor has committed suicide. Trip feels that it's all his fault, and in an unexpected twist of the knife Archer actually agrees: it is Trip's fault. He interfered where he wasn't supposed to, and now someone is dead. Life with it. Roll credits. It's rare for a franchise as deeply optimistic and utopian as Star Trek to be so blunt and unforgiving.

What I like the most about the episode is that it deliberately leaves the moral argument open. It doesn't give you a neat answer, or reassure you that one character or another is in the right. It's up to the viewer to decide, and the effect is an episode that is brilliantly uncomfortable and very thought-provoking. Personally I found Trip's intentions morally correct but his actions ethically wrong.

Explorations of sex and gender are something I always welcome in science fiction television. This episode in particular reminded me of the short-lived Fox series Alien Nation, in which the Tenctonese had a similar division of the sexes; while there were women, there were two separate sexes of men - the commonplace Binnaum and the comparatively rare Ganum. Unlike the cogenitor in Enterprise, who was treated like an object, the Ganum were feted as holy in Tenctonese culture. It's an interesting comparison.

It's a very well performed episode: Connor Trinneer plays Trip's growing concern very well, while Becky Wahlstrom does a great job with the childlike cogenitor. Cult TV fans will likely get a bigger kick out of seeing Andreas Katsulas as the Vissian captain. He appeared several times in Star Trek: The Next Generation, not to mention playing G'Kar in all five seasons of Babylon 5. It's always a pleasure to see him, even in a comparatively easy, non-descript role like he has here. This was his final television role; he was diagnosed with incurable lung cancer shortly afterwards.

This episode gets a big thumbs-up from me, giving Enterprise Season 2 14 good episodes out of 22 and a season score of 64%.
Posted by Grant at 9:53 AM