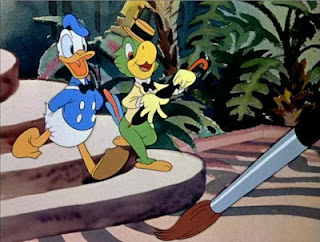 It's 1941: World War II is heating up and the USA is nervously anticipating getting dragged into the conflict sooner or later. There's a worry in the State Department that several South American countries will side with Nazi Germany, leaving a host of enemy nations on the USA's doorstep. How do you counteract that threat? What's the best way to mitigate the risk? If you're the USA Department of State in 1941, the answer is clear: you pay the Walt Disney Animation Studios and RKO Pictures to embark on a goodwill tour of Latin America, and pay for them to produce an animated film to distribute 'south of the border'.

Saludos Amigos is a pure and simple propaganda piece. It's government-funded and boasts a clear strategic motive of swaying South American nations towards the Allied cause through their affinity with Donald Duck. It would seem ridiculous if it wasn't true, but there it is - still available on DVD worldwide. At 40 minutes it's the shortest of all Disney animated features (you can watch it three times in the space it would take to watch Fantasia once), but when you're animating on a truncated timetable and (by the time production was underway) half your best animators have enlisted in the US armed forces, you make what you can.

This is a portmanteau film, as pretty much all Disney animated features were during and immediately after the war. Rather than tell a single story it's essentially a package of related shorts. There are four in Saludos Amigos: "Lake Titicaca", "Pedro", "El Guacho Goofy" and "Aquarelo de Brasil".

"Lake Titicaca" sees Donald Duck visit the titular lake on the Bolivian border, where he has a misadventure with a llama. It's a fairly by-the-numbers humorous short, neither exceptionally inventive nor tedious to watch. The most striking element of the short, and it's one that is repeated throughout the film, is how live-action documentary sequences before the short explain where the animators went on their tour and shows the sketches and paintings each artist made while there. It's actually rather charming to see an artist like Mary Blair or Norman Ferguson sketching out an image, and then seeing the same object replicated in a cartoon five minutes later.

"Pedro" is the weakest of the four shorts, telling the story of an anthropomorphized plane making a hazardous mail run over the Andes. It's rather twee and old-fashioned, even by 1942 standards, and doesn't really gel with the rest of the film. "El Guacho Goofy" is a classic Goofy short, transporting him to Argentina to become a horse-riding "guacho". What's striking about this sequence is how effectively it foreshadows the humour of Chuck Jones and the better Looney Tunes of the 1950s. (A note for film purists: the DVD edition of Saludos Amigos has edited "El Guacho Goofy" to remove a sequence of the character smoking a cigarette. The unedited version is available as a special feature on the Walt and El Guapo documentary DVD.)

If "El Guacho Goofy" appears to foreshadow Looney Tunes, then the final short of Saludos Amigos appears to actively inspire it. "Aquarelo de Brasil" is a stunning work of art, in which an animated watercolour painting comes to life. Donald Duck interacts with artist, brush and paint in a manner which is precisely akin to Daffy Duck in the classic Chuck Jones short "Duck Amuck" (1953). If one didn't partly inspire the other I would be very surprised. "Aquarelo de Brasil" is easily the strongest short in the film, combining beautiful paintwork with humour, excellent music and the debut of José Carioca - a cartoon parrot who proved so popular he returned to Disney's animated features twice (in The Three Caballeros and Melody Time). He still crops up regularly in Brazil's Walt Disney comic books, where he's remained as popular as Mickey and Donald.

Is this one of the best Disney animated features? Probably not, but it's a fascinating exercise, it's short and to the point and it has a unique place in the history of film animation.
Posted by Grant at 9:46 AM