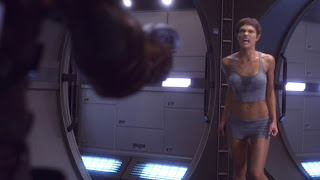 Captain Archer is kidnapped by a Tellarite bounty hunter, who plans to sell him to the Klingons - who are still hunting for the Captain after he escaped from Rura Penthe. Meanwhile a bacterial infection causes T'Pol to enter the Vulcan "pon farr" several years early, leading her to start behaving erratically towards Dr Phlox.

When Enterprise was launched I took one look at the slim, sexualised Vulcan science officer and immediately began dreading the episode when Subcommander T'Pol would experience pon farr, the Vulcan sexual cycle. When the concept was introduced it made for a pretty entertaining episode of Star Trek ("Amok Time"), but a combination of male writers, a female Vulcan and a propensity to show the character off in a variety of tight-fitting jumpsuits had me fearing the worst. "Bounty" is about as bad as I was expecting.

Poor Jolene Blalock is left to writhe and moan in the most awful manner possible, and it's cringe-inducing to watch. I felt sorry for her. I felt sorry for John Billingsley for having the share the scene. I felt sorry for the entire cast for having to share their series with a set of scenes so bad. What's worse is that they set her "Vulcan on heat" sequences inside the decontamination chamber so that she can strip down to her underwear and rub herself with lotion. This is not good television.

The other storyline is exciting for some old-school Trek fans I suppose, as it reintroduces the Tellarites to the series. Cameos aside they haven't been seen since the 1960s, so it does have a nice sense of novelty to it. Sadly the idea that the Klingons would hire bounty hunters, and then deliberately underpay them, jibes badly with everything Star Trek has told us about the Klingons. These are supposed to be a proud race of honourable warriors; surely they'd hunt Archer down themselves rather than subcontract the job?

Robert O'Reilly is best known to Star Trek viewers as the Klingon chancellor Gowron in The Next Generation and Deep Space Nine. He plays a completely different character here, in both tone and delivery, and I was actually surprised to see it was the same actor who played both characters.

All up, however, this is not a good episode. Sadly it's also - as we shall see - the final episode produced that followed Enterprise's original direction. At this point the viewing figures were not healthy, and with the season finale the series would undergo a considerable creative shake-up. For he original format, this is not a good note bow out on. Out of 25 episodes this season, 15 have been good: that's a rolling score of 60%.
Posted by Grant at 12:53 AM