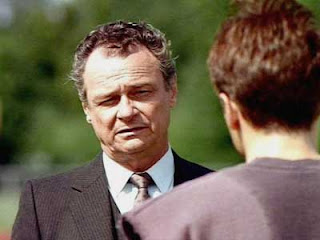 The X Files pilot episode did a great job of introducing viewers to FBI special agents Fox Mulder and Dana Scully, as well as the overall thrust of the series: two detectives investigating the paranormal and unexplained across America. This second episode, "Deep Throat", teases in the second critical pillar for the series: a government conspiracy to hide the existence of aliens among us on Earth.

Shortly after being called to investigate the disappearance of a US Air Force pilot, Mulder is met by an anonymous middle-aged man (Jerry Hardin) who warns him from following the lead. When Mulder and Scully arrive in southern Idaho they uncover what seems to be a military program to use UFO technology to build super-powered stealth fighters. Before long there are black helicopters, illegal surveillance, kidnapping, men in black and all manner of archetypal and stereotypical conspiracy elements.

This is a critical episode of The X Files, not simply because it introduces Season 1's most significant recurring character (the titular Deep Throat) but also because it kicks off a government conspiracy story arc that will roll and mutate its way through the next nine seasons. Eventually it will become too complicated and unwieldy for its own good, but here at the beginning its simply a gripping and involving mystery.

It's easy to think of the episode's many elements as cliches or stereotypes, but that's partially because we're now coming to this episode from the other end of the series, where all the elements have been played out, copied, parodied and creatively burned to the ground. In the context of 1993 it's remarkable stuff; I remember being even more enchanted by this episode than the pilot. The final scene is a great kicker: 'They're here, aren't they?', asks Mulder, meaning aliens, to which Deep Throat ominously replies 'Mr Mulder, they have been here a long time.'

Gillian Anderson and David Duchovny have settled into their characters remarkably well for what's only the second episode. It's amazing how immediately they cement themselves: Mulder's overriding passion, Scully's exhausted skepticism, and the slightly teasing, gently mocking way they interact with one another. It's a shame the production team saw fit to romantically link them in later years, because as they are here they're probably the best platonic hetereosexual friendship in American television.

One random element worth checking this episode out for is a comparatively early performance by former child actor Seth Green - post Woody Allen, pre-Buffy the Vampire Slayer - as a teenage stoner.

All up this is just a great hour of SF television, and manages to expand and enhance an already gripping television series. We're two for two.
Posted by Grant at 4:12 PM